Biden, Erdogan Agree on ‘Continued Close Consultations’ between US, Turkey 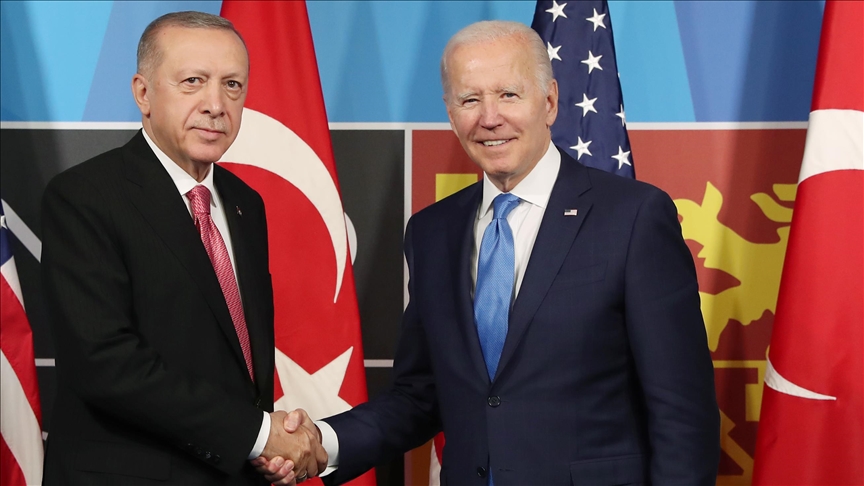 Turkish and US presidents agreed on “continued close consultations” between Washington and Ankara during a meeting in Madrid, the White House said.

The meeting between Recep Tayyip Erdogan and Joe Biden took place on Wednesday on the sidelines of the NATO summit.

The two leaders discussed Sweden and Finland’s NATO membership bids, the Ukraine war, as well as the situation in the Aegean and Syria.

“President Biden reiterated his desire to maintain constructive bilateral relations, and the leaders agreed on the importance of continued close consultations between our governments,” the White House said in a statement.

The US president also welcomed Ankara’s conclusion of a trilateral agreement with Finland and Sweden that paved the way for NATO to invite them to join the alliance.

“The leaders discussed their continued support for Ukraine in its defense against Russian aggression, as well as the importance of removing Russian obstacles to the export of Ukrainian grain,” the statement said.

The two leaders also talked about the importance of maintaining stability in the Aegean and Syria.

In a brief conversation before a closed-door meeting, Erdogan said steps being taken to strengthen NATO will have a “special contribution” in the context of the Russia-Ukraine crisis.

The Russia-Ukraine war has had negative effects on grain and oil, the Turkish president said, adding “We are trying to resolve the process with a balanced policy in this regard. We hope that we will get results with this balanced policy.”

He expressed hope of opening corridors soon to the countries that are currently lacking grain.

Biden thanked Erdogan for his efforts to get millions of tons of grain out of Ukraine and supporting Sweden and Finland’s NATO membership.