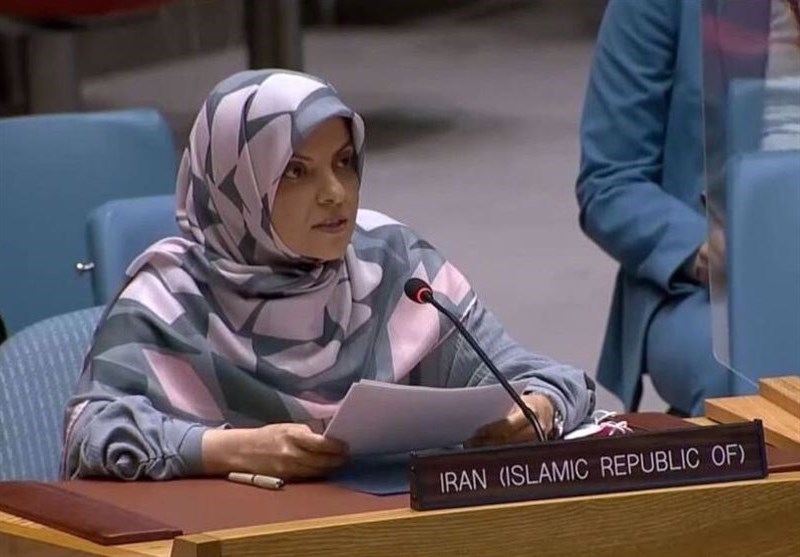 Iran’s UN ambassador deplored attempts by certain states to politicize the Syrian chemical weapons file, warning that it would prevent the OPCW from confirming Syria’s compliance with its obligations.

Iran’s ambassador and deputy permanent representative to the United Nations, Zahra Ershadi, read a statement at a meeting of the UN Security Council on “The situation in the Middle East: (Syria – Chemical)”, held in New York on Friday.

Here is the full text of her statement:

“In the Name of God, the Compassionate, the Merciful.

Today is the twenty-fifth anniversary of the entry into force of the Chemical Weapons Convention, which aims to protect humanity from the devastating repercussions and scourge of the use of chemical weapons.

In this context, we reiterate our call for the full, effective, non-political, and non-discriminatory implementation of the CWC, and preserving the OPCW’s authority as well. We believe that politicizing the implementation of the Convention and exploiting the OPCW for politically motivated agendas endangers the Convention’s credibility and also the Organization’s authority.

We also emphasize that any investigation into the use of chemical weapons must be impartial, professional, credible, and objective in order to establish the facts and reach evidence-based conclusions, and in doing so it must strictly adhere to the provisions and procedures within the framework of the Convention; no deviation from the Convention shall be permitted.

Syria has made genuine efforts to meet its Convention’s obligations and has proven its willingness to collaborate with the OPCW Technical Secretariat. However, it is disappointing that certain States Parties have politicized the Syrian chemical weapons file, preventing the OPCW from confirming Syria’s compliance with its obligations, which could have resulted in constructive dialogue and cooperation with Syria.

We recognize the critical importance of the Syrian Government’s efforts to fulfill its obligations under the Convention.

We support the approach taken by OPCW and Syria to the high-level dialogue and hope that this initiative will produce positive results.

We welcome Syria’s submission of its 100th monthly report to the OPCW on 16 March 2022, regarding activities on its territory related to the destruction of its chemical weapons and their production facilities.

And finally, we reiterate our recommendation that in order to improve the Council’s efficiency and create a positive environment conducive to a constructive dialogue between Syria and the OPCW, the Council’s deliberations on the chemical weapons’ file should be less repetitive and less frequent.