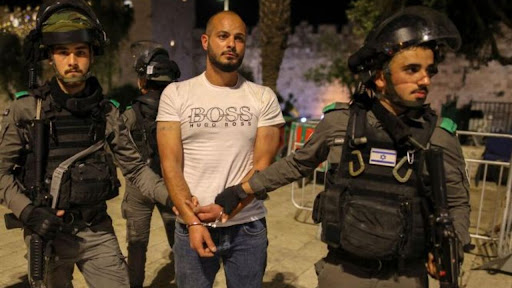 Israeli forces detained Tuesday overnight 12 Palestinians and injured another in multiple raids across the West Bank, according to local and security sources.

They said that Israeli forces rounded up two Palestinians, including a former prisoner, after storming their houses in al-Am‘ari refugee camp, south of al-Bireh city.

During ensuing confrontations, the soldiers opened fire towards local teens who protested the raid, injuring a 17-year-old teen by .22 caliber bullets, known as Toto ammunition, in the foot.

In the southern West Bank, soldiers barged their way into Beit Ummar town, north of Hebron, where they detained three others, including a former prisoner.

They conducted separate raids in Halhul and Yatta cities, south of Hebron, resulting in the detention of two others.

In the northern West Bank, the sources confirmed a similar raid in Sir town, south of Jenin city, resulting in the detention of a father and his son.

Israeli military vehicles stormed Ya‘bad town, southwest of the city, where the soldiers forcibly entered the family house of Munadel Nufei’at, one of the re-arrested six prisoners who managed to escape from Gilboa Prison in early September, as well as those of his brothers, and interrogated the occupants.

In the same context, Israeli troops rounded up three others in the northern West Bank from Tubas city and ransacked their houses, turning them upside down.

A villager of Kafr Laqif village, east of Qalqilia city, was detained after being stopped at a flying checkpoint on Qalqilia-Nablus Road.