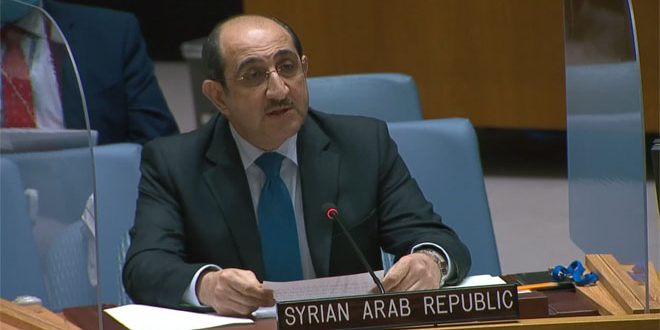 Syria’s Permanent Representative to the UN, Bassam Sabbagh, said on Tuesday that some countries still put obstacles in front of the solution to the crisis in Syria.

Sabbagh added during a Security Council session that Syria rejects any foreign intervention in the work of the Committee of Discussing the Constitution or any attempt to impose timetables and premature conclusions for its work as “constitution is an issue decided by the Syrians”.

He added that Syria continued its cooperation with UN Special Envoy for Syria, Geir Pedersen and welcomed his visit to Damascus on September 11 and 12th where he held constructive talks.

“We listened to his briefing today, and welcome his intention to convene the 6th round of the Committee of Discussing the Constitution in Geneva in next October,” Sabbagh said, stressing that the Special envoy has to maintain his role as a facilitator and to convey what is happening in a fair and objective manner.

Sabbagh went on to say that the recent achievements in Daraa of settlements and reconciliations reaffirm Syria’s keenness on restoring security and stability to all parts of the country with guaranteeing the safety of its citizens and saving the lives of innocents.

He stressed that the war imposed on Syria by well-known countries through various and different means has claimed the lives of many civilians and caused damage to ancient civilizational achievements and the loss of prestigious developmental gains obtained by the Syrian people throughout many decades.

He called for removing the unilateral coercive economic measures imposed by the US and the European Union on the country and supporting the efforts of the Syrian state and its allies in the war against terrorism.