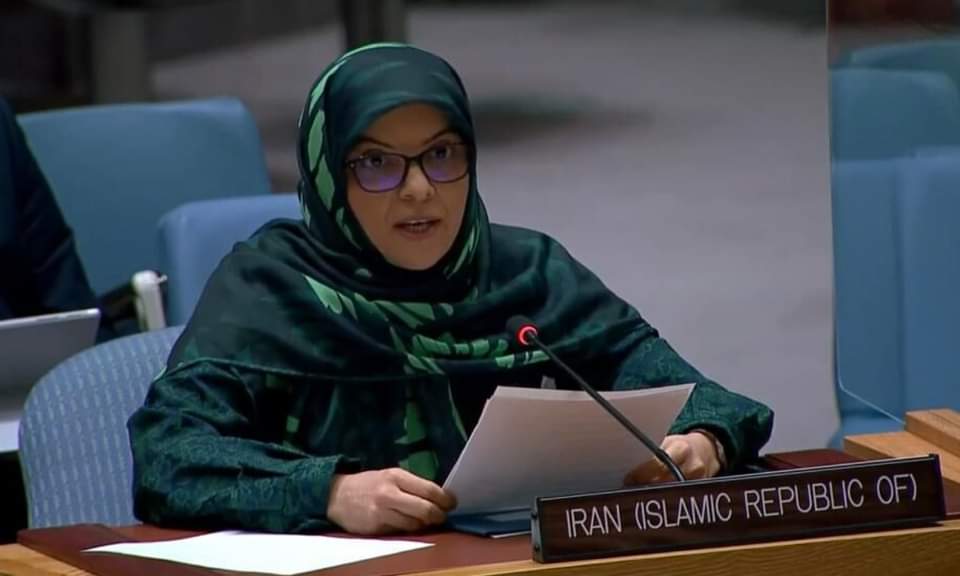 Iran’s ambassador to the United Nations called on the UN Security Council to implement its own resolutions and compel the Israeli regime to immediately cease its systematic violations of human rights and international humanitarian law.

Addressing a UNSC meeting in New York on Tuesday, Ambassador and Deputy Permanent Representative of Iran to the UN Zahra Ershadi urged the Security Council to uphold its Charter obligation to maintain international peace and security as the Israeli regime continues to commit the most systematic and flagrant violation of children’s rights in the Middle East.

What follows is the text of her speech:

The situation in occupied Palestine remains dire, as the Israeli regime’s brutality and grave and systematic violations of human rights against the Palestinian people continue unabated.

According to the UN report, the Israeli regime continues to kill innocent people, including women and children, seize and demolish Palestinian homes, and forcibly evict Palestinians from their homes. At the same time, in blatant violation of international law as well as pertinent UN resolutions, the establishment of settlements in occupied Palestine continues.

The recent assassination of Shireen Abu Akleh, a veteran Palestinian journalist, was in line with Israel’s long-running, well-documented campaign of harassment, intimidation, and violence against journalists with the ultimate goal of obscuring the atrocities committed by the Israeli regime against Palestinians.

Meanwhile, the UN annual report on the Protection of Children in Armed Conflicts revealed that the Israeli regime continues to commit the most systematic and flagrant violation of children’s rights in the Middle East. This regime murdered 86 Palestinian children and imprisoned 637 more in 2021.

The humanitarian situation in Gaza is tragic. According to the UN report, nearly 2 million Palestinians are ‘locked in,’ with the vast majority unable to access the rest of occupied Palestine or the outside world. Longstanding Israeli policy on access restrictions against Gaza has egregiously impacted its economy, resulting in high unemployment, food insecurity, and reliance on aid.

As a collective punishment against all its inhabitants, the continued blockade of Gaza constitutes a clear manifestation of war crime and crime against humanity. In accordance with international law, the blockade must be lifted immediately and completely.

Furthermore, the Israeli regime’s destabilizing activities against regional countries are continuing. The regime continues to violate Syria’s sovereignty and territorial integrity through its prolonged occupation of the Syrian Golan, as well as numerous attacks against civilian targets and civilian infrastructure within Syria, including the recent terrorist attacks against Damascus International Airport on June 10, 2022.

We strongly condemn such grave violations and malevolent and destabilizing activities, which clearly threaten the peace and security of the region.

The Security Council’s inaction has emboldened the Israeli regime to continue its crimes against the oppressed Palestinian people as well as its aggressions and malicious activities against the regional countries. The lack of accountability for such serious violations contributes to this impunity.

The Security Council must uphold its Charter obligation to maintain international peace and security. The Council is expected to implement its own resolutions and compel the Israeli regime to immediately cease its systematic violations of human rights and international humanitarian law.

Finally, The Israeli regime’s representative has once more abused this forum and made false accusations against my country, all of which are categorically rejected. These unfounded allegations are intended to distract attention from the continuous atrocities and violation of international law committed by the Israeli regime in occupied Palestine and other countries in the region.

The weapons of mass destruction in the hands of the Israeli regime have made this regime even more dangerous for the entire region.

This regime’s nuclear arsenal, according to multiple reports, comprises 400 hundred warheads, including thermonuclear weapons. It has access to all weapons of mass destruction delivery systems. The Israeli regime has even threatened nuclear annihilation against the countries in the region. It has refused to adhere to any weapons of mass destruction disarmament or control regimes, as well as the repeated international calls to join the NPT, accept the Comprehensive Safeguard Agreement, and submit its nuclear programs to the IAEA inspections.

It is high time for the Security Council to condemn the Israeli regime and force it to adhere to the international regimes banning weapons of mass destruction. The time to act is now.

I thank you, Mr. President.