Top Iranian Commander: Iran to cut off hands of aggressors 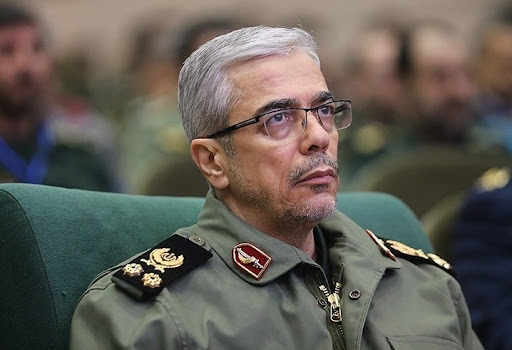 Chief of Staff of Iran’s Armed Forces, Major General Mohammad Baqeri warned Israel against making the slightest mistake, stressing that Iran will cut off their hands if they do so.

On the sidelines of the last day of Great Prophet 17 drills on Friday, Major General Mohammad Baqeri stressed that the joint exercise was indicative of the readiness of the Army and Islamic Revolution Guards Corps (IRGC) forces to toughly respond to any threat by the enemies of the countries.

He also said that this exercise was planned in advance, but the empty threats of the Israeli officials in recent days caused this exercise to take place at this time.

General Baqeri also said Iran’s military can hit a target with 16 missiles simultaneously, demonstrating only a part of the Islamic Republic’s missile power.

He said the Islamic Republic of Iran never tolerated the threats; it was already negotiating with the other countries for its improvement.

Great Prophet 17 drills (PBUH) kicked off on Monday morning, December 20, in the Persian Gulf, the Strait of Hormuz, and the coasts of Hormozgan, Bushehr, and Khuzestan provinces.

On the last day of the Great Prophet 17 drills, the IRGC Aerospace Force simultaneously launched 16 ballistic missiles that successfully hit their targets.