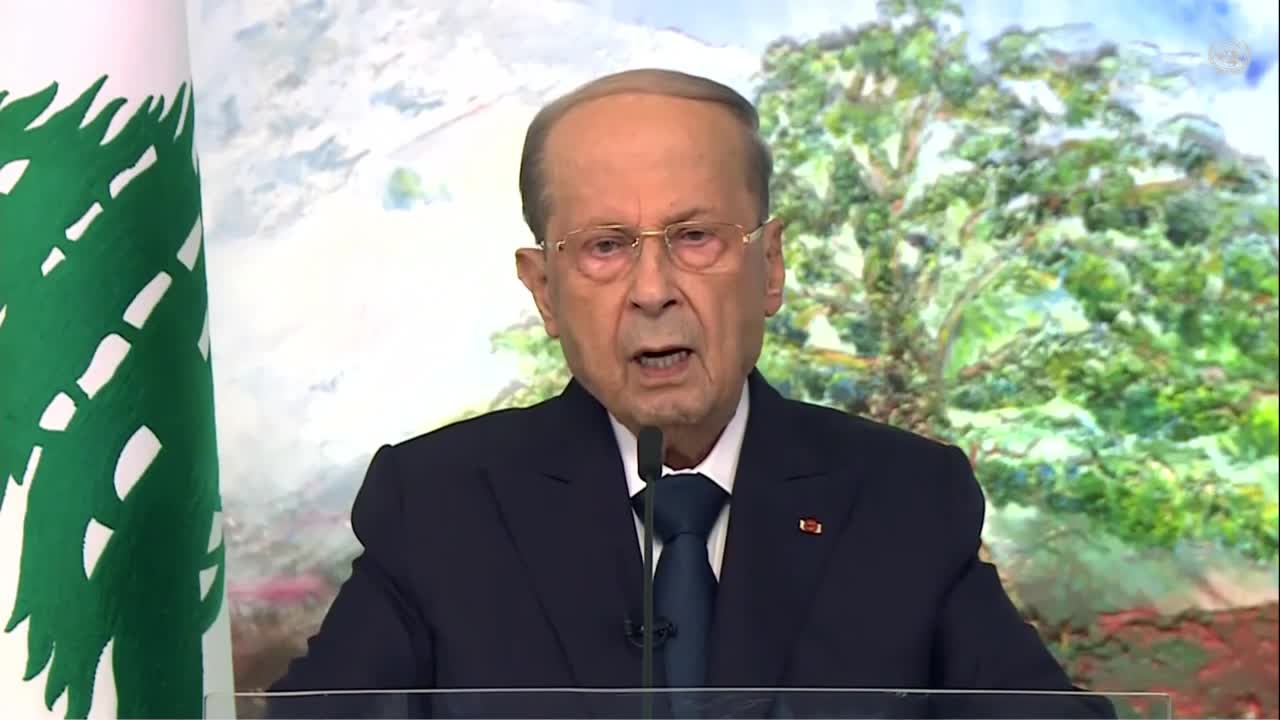 Lebanese President Michel Aoun addressed on Friday the 76th session of the United Nations General Assembly by videoconference, underlining insistence on preserving the right to oil and gas resources in light of the Israeli infringement.

“The persistent Israeli threats remain the main concern of the Lebanese State, the last aspect of which was Israel’s attempt to explore for oil and gas in the disputed area on the maritime borders.”

Aoun noted that Lebanon condemns any attempt to transgress the boundaries of the Exclusive Economic Zone within which Lebanon holds on to its right to oil and gas resources, especially that exploration procurement has begun months ago, then was halted due to strains whose source is no longer a secret to anyone.

“Lebanon demands the resumption of indirect negotiations for the demarcation of the Southern maritime borders according to international laws. It affirms that it shall not back off and shall not accept any compromise. The role of the international community is to stand by it.”

As for the anti-coronavirus vaccination, Aoun noted that Lebanon shall have the credit of being among the pioneering countries in this respect, as the rate of vaccination to date has reached 30%, and the concerned authorities are striving to surpass the 40% goal by the end of the year.

“Over the past two years, Lebanon has known its hardest times, whereas successive crises – some inherited and ramified and some urgent – exploded simultaneously, affecting all sectors,” Aoun said, adding “Indeed, the financial and economic policies adopted for decades and built upon the profit-based pattern, in addition to corruption and waste that result from bad management and absence of accountability, pushed Lebanon into an unprecedented financial and monetary crisis which led to economic stagnation, a stifling livelihood crisis, and growing in unemployment, migration and poverty rates.”

“The Government has committed to carry out the pressing and required financial and economic reforms, to fight corruption and lay down a financial recovery plan in the context of continuing negotiations with the International Monetary Fund, accompanied by a plan to generalize the social safety net, a plan to reform and – where needed – restructure the banking system, and to carry on with the implementation of the electricity sector plan.”

Aoun further indicated that the Lebanese justice is investigating the causes and circumstances of the Beirut Port explosion and the administrative liabilities and that it has many defendants and arrested.

“The investigation, which remains confidential, still needs to unveil where the explosive materials came from, why they entered our port, who is really behind them, and if the satellites captured anything at the moment of the blast.”

The Lebanese President also said that a large piece of land very close to Beirut has been allocated to host the Academy for Human Encounters and Dialogue and that the necessary studies have been prepared to initiate construction works, calling on all friendly and brotherly States to join those which have already expressed their desire to sign the Academy establishment convention.