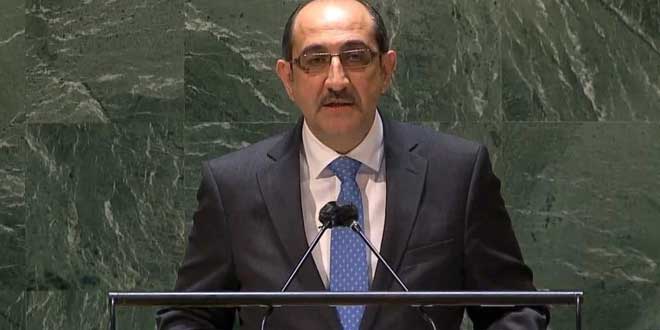 Syria has affirmed its condemnation of Western hostile practices, stances and campaigns which target Russia and the attempts to offend it, noting that some Western countries, particularly the United States, fabricated the Ukrainian crisis to undermine Russian national security.

Syria’s permanent representative to the United Nations, Ambassador Bassam Sabbagh, said during a meeting of the UN General Assembly on Wednesday on the Ukrainian crisis, that Syria has always been keen on emphasizing the importance of solving regional and international problems through diplomacy and dialogue, and has supported all efforts to maintain security and stability in any spot of tension in the world, starting from believing in the importance of respecting the principles and purposes of the UN Charter.

Sabbagh noted that the inclusion of the item entitled “The situation of the temporarily occupied territories of Ukraine” on the agenda of the General Assembly is a unilateral, irresponsible and politicized step that reflects the desire of some Western countries to escalate the situation in that region and to exert pressure on Russia at the expense of regional and international security and stability and the solid historical relations between the peoples of the two countries.

Sabbagh added that the General Assembly’s continued consideration of this issue constitutes an assault on the mandate of the Security Council and a violation of Article 12 of the UN Charter.

He clarified that the issuance of Security Council Resolution No. 2202 of 2015 is evidence of the Council’s consideration of this issue, which requires that the General Assembly does not take any action unless requested by the Security Council, a condition that has not been fulfilled in this case.

Sabbagh stressed that the absence of political will on the part of the Kiev authorities and the negative interventions of NATO and Western countries that claim to be keen on Ukraine and at the same time seek to escalate tension there, create a hostile atmosphere and deploy heavy weapons and missiles, prevented the implementation of the Minsk agreements of 2015 and led to the abuse of the historical relationship between Russia and Ukraine and tension, indicating that Western countries are generously sending weapons and missiles to Ukraine without much consideration of the consequences.

Syria’s Permanent Representative to the United Nations made it clear that the proposals which Russia has been making were worthy of deep consideration before taking any measures or threatening to take measures from NATO and some Western countries, pointing out that imposing illegal coercive measures by the US and some Western countries will not only worsen the situation, especially after it was proven that such measures failed to deal with sensitive issues in international relations.

Regarding the situation in Crimea, Sabbagh indicated said that Syria’s position is based on the results of the referendum that took place on March 16, 2014, in which more than 82 percent of voters expressed their will in accordance with international law and democratic practices and chose to remain as part of the Russian Federation, calling on Western countries that pay lip service to democratic slogans and human rights to respect the choices and will of the Crimean people.

Sabbagh stressed that the hostile stances and campaigns targeting Russia and inciting against it, which have been intensified during the recent period and reverberated in different contexts, are all practices which indicate that Western countries, particularly the US, have fabricated the Ukrainian crisis to divide peoples and undermine Russia’s national security. Therefore, Syria condemns these practices and the attempts to offend the Russian Federation.

“Syria highly appreciates the high restraint shown by the Russian side in the face of this escalation and successive provocations, and its reluctance to be drawn into the attempts of the United States, its Western allies and NATO officials.” Sabbagh said.

Sabbagh expressed Syria’s regret and denunciation that countries claiming to be keen on security and stability in the region did not condemn the military aggression that led to the death of innocent civilians, including women and children, in the Donbass region and pushed large numbers of people to migrate into Russian territory in search for safety and security.

Sabbagh reiterated Syria’s stance that confronting the aggressive policies of Western powers is a common and permanent interest for all peoples who oppose the hegemony of these forces which must be confronted in all possible forms.

He stressed that peace and security in Europe will not be achieved unless the legitimate security concerns of the Russian Federation are taken into account, in addition to providing the required security guarantees to the Russian people, especially in light of the failure of Western countries to implement the promises they made to Russia three decades ago.