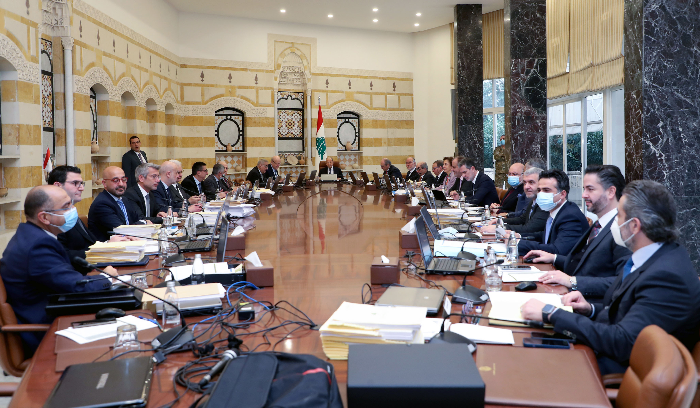 The Cabinet convened today in a session chaired by President of the Republic, General Michel Aoun, and attended by Prime Minister, Najib Mikati and ministers.

The Council of Ministers approved the 2021 draft budget law and decided to hold consecutive daily sessions to approve the 2022 draft budget law, in preparation to referring the budget to the Parliament.

In addition, the Cabinet approved a series of social offerings and an increase in transportation allowance for the public and private sectors, and military and security agencies, fulfilling promises to workers in the formal educational sector.

President Michel Aoun noted that the “Cabinet-session interruption negatively affected the regularity of the work of the executive authority and increased the accumulation of negative repercussions of the general situation”.

The President also said that “When the government is not resigned, the President of the Republic and the Prime Minister cannot issue exceptional approvals,” asking to start studying livelihood issues which concern citizens, provided that agenda topics will be studied later.

For his part, Prime Minister Mikati said that “The remaining time before parliamentary elections has become very stressful. We will try as much as possible to accomplish basic issues which are first related to the daily life of citizens, electricity, general budget and gas and oil”.

The Prime Minister also revealed that “Upcoming sessions will be full of issues and basic files for all ministries and departments”.

The session convened at 9:00am in the presence of minister, except Justice Minister, Henry Khoury, who is on an official mission to Iraq. The Cabinet session was preceded by a meeting between the President and Prime Minister, during which agenda topics were deliberated , in addition to life and livelihood issues.