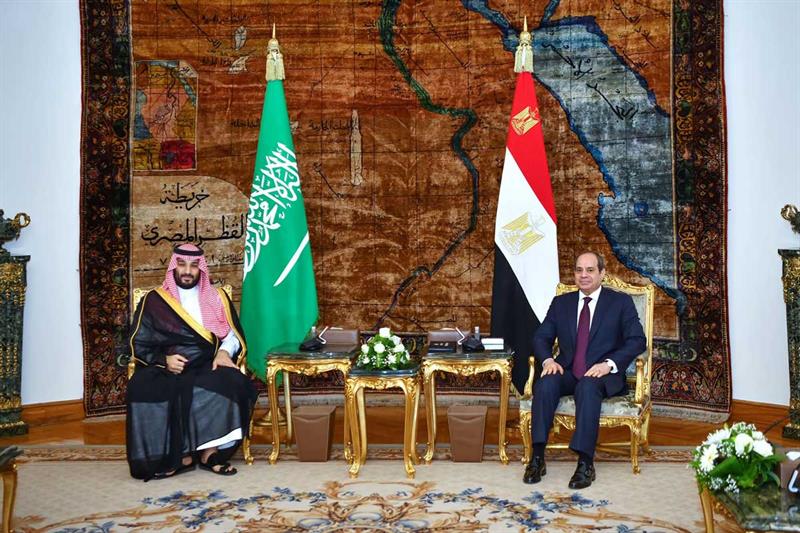 Egypt President Abdel-Fattah El-Sisi said on Tuesday Egypt’s commitment to its stance regarding the national security of the Gulf region as part of its own national security rejecting any practices aiming to destabilize it in his meeting in Cairo with Saudi Arabia Crown Prince Mohamed bin Salman, the Egyptian Presidency said.

Cairo is the first stop for Prince bin Salman in a regional tour that includes also Jordan and Turkey.

According to the Egyptian presidency, El-Sisi and bin Salman also discussed the latest developments regionally and internationally, with both sides having a mutual understanding about continuing joint efforts to face the dangers threatening the security and stability of the region.

In a joint statement issued following the meeting, Egypt and Saudi Arabia emphasized the necessity of supporting international efforts to stop Iran from developing nuclear weapons and to ensure the peaceful nature of Iran’s nuclear program. They also highlighted the importance of boosting the role of the International Atomic Energy Agency (IAEA) as well as safekeep the Treaty on the Non-Proliferation of Nuclear Weapons (NPT).

Both Egypt and Saudi Arabia reiterated their support for efforts to make the Middle East a nuclear weapons and weapons of mass destruction free zone in a way that contributes to achieving international and regional stability.

They also support the efforts to encourage Iran to commit to the principles of non-interfere in the Arab states’ affairs and refrain from all destabilizing activities in the region including supporting armed militias and threatening maritime navigation.

According to the joint statement, both leaders also discussed other developments in Palestine, Syria, Libya, Yemen, Iraq, Lebanon and Sudan.

The summit will host the heads of state of the GCC countries, the leaders of Egypt, Jordan and Iraq, as well as US President Joe Biden, who will be making his first tour in the Middle East by visiting Saudi Arabia, Israel, and the West Bank.

Regarding the Grand Ethiopian Renaissance Dam (GERD), Saudi Arabia reiterated its full support to the Egyptian water security as a part of Arab water security, encouraging Ethiopia not to take any unilateral actions regarding the filling and operation of the dam. They also called for Ethiopia to agree to a legally binding agreement with Egypt and Sudan in accordance with the UN Security Council’s presidential statement issued in September 2021.

During the talks, the Saudi crown prince praised Egypt’s vital role as a main pillar of security and stability in the region.