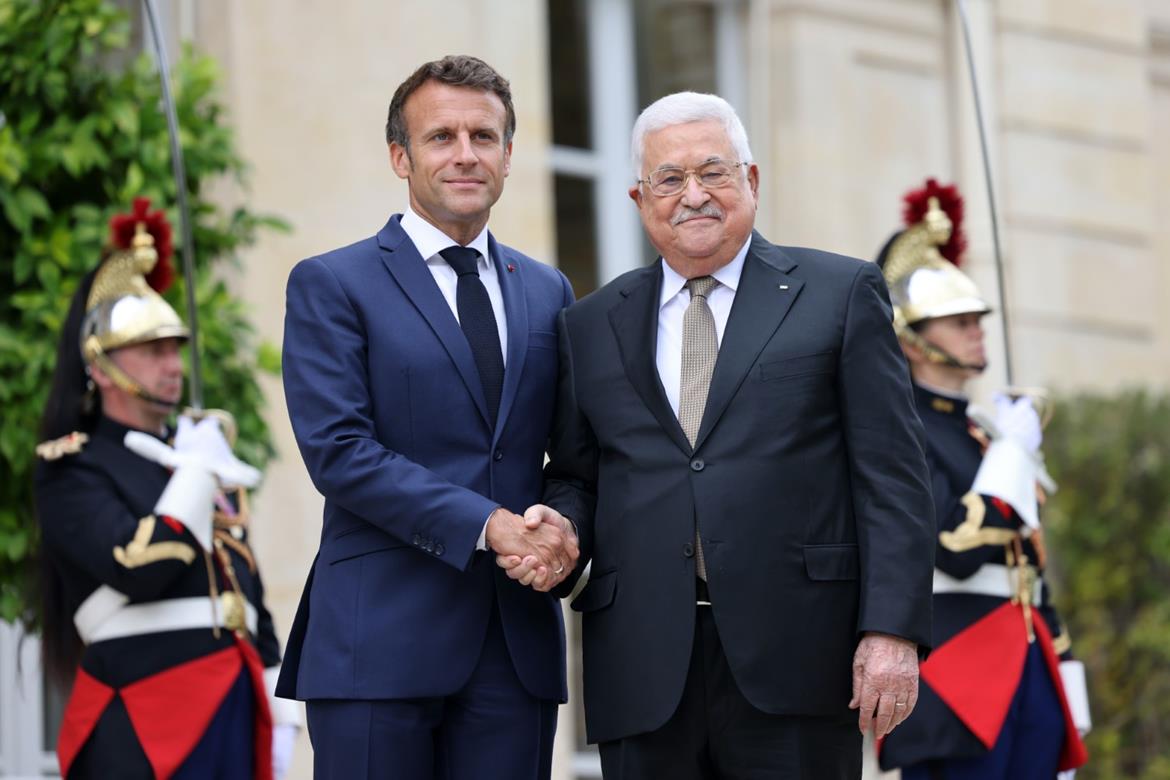 Palestinian President Mahmoud Abbas commended on Wednesday France’s positions in support of just and lasting peace in the Middle East.

Speaking in a joint press conference with his French counterpart, Emmanuel Macron, at the Elysee Palace, Abbas commended France for such positions based on the two-state solution in line with the UN resolutions to assist the Palestinian people in the realization of their right to independence and freedom.

He said that he counts on Macron’s role in launching initiatives to advance peace-making efforts in the Middle East in cooperation with concerned European and Arab actors.

He expressed his willingness to engage with France on the realization of peace based on international law and UN resolutions, so as to put an end to the Israeli occupation of the Palestinian territories based on the 1967 borders, including East Jerusalem, the capital of the Palestinian state.

The president further stressed the need to stop unilateral actions that undermine the two-state solution, chiefly illegal Israeli colonial settlement construction, and implement the signed agreements as a prelude to transition to a political horizon based on the two-state solution on the basis of the 1967 borders in line with international law and the UN resolutions, so as all states in the region would live as good neighbors in security and peace.

Addressing Israeli settler-colonialism in Jerusalem, Abbas condemned the occupation authorities’ practices designed to deface the Palestinian identity of the city, alter its demographics, legal status and religious character, with focus on the forced expulsions of Palestinian families from Jerusalem neighborhoods, such as Sheikh Jarrah, home demolitions, encroachments upon holy sites and takeover of church property.

He reiterated his gratitude to the EU and Member States for their important and persistent role in the creation of stability and peace and in improving the economic conditions of the Palestinian people.

Abbas renewed his demand that 74 years have passed since the forced expulsion and ethnic cleansing of some 750,000 Palestinians by the Zionists and turning them into refugees to establish a Jewish-majority state in Palestine, EU Member States recognize the independent State of Palestine on the 1967 borders, as a protection for the two-state solution, as well as the Palestinians’ right to self-determination.

He noted the Palestinian leadership’s ongoing efforts with regard to building state institutions in line and keenness to implement the principles of rule of law, transparency and accountability and partnership with the civil society as well as the private sector.

The president concluded that the intervention of the international community is required to hold presidential and legislative elections throughout the occupied territories, including East Jerusalem.

Abbas arrived in the French capital, Paris, on Tuesday evening, on an official visit.

Macron Urges Hezbollah, Israel to Avoid any Action that Could Worsen Relations between Israel and Lebanon