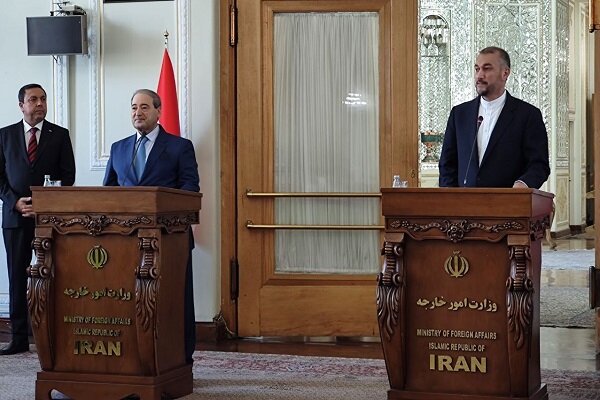 Iranian Foreign Minister Hossein Amirabdollahian said that Iran is concerned about the possible military attack of Turkey on Syrian soil.

Amirabdollahian made the remarks in a joint press conference with his Syrian counterpart Faysal Mikdad on Wednesday.

Stressing that Iran is continuously talking and consulting with Turkey and Syria, Amirabdollahian said that last night, an attempt was made to resolve the concerns of the Turkish authorities regarding the security of the common border between the two countries.

Referring to the 7th Astana Troika summit held last night in Tehran, Amirabdollahian said that considering the sensitive situation in which Syria is now and the possibility of a new conflict in the border areas of Syria, the summit tried to help Syria to be away from war and militarism.

The summit also tried to resolve the Syrian political issues, according to the Iranian foreign minister.

“We hope that these recommendations, which were emphasized by the heads of countries participating in the Astana summit, will be taken into consideration by the officials of the friendly country of Turkey and that Turkey and Syria will pass this stage well,” Amirabdollahian stated.

“Regarding the issue of Syria, the presence of armed and terrorist groups in some areas of this country is a cause of concern for us and our allies in the region. We used the opportunity of the tripartite meeting to take a step forward in the issue of the withdrawal and cleansing of terrorist and armed groups from Syria and the return of security across the borders of Syria by maintaining the territorial integrity of this country,” the Iranian top diplomat said.

Elsewhere in his remarks, Amirabdollahian underlined the importance of maintaining territorial integrity and respect for Syrian sovereignty and resolving the remaining issues in the field of terrorist conflicts in Syria and some of Turkey’s concerns about the presence of some groups in Syria.

He further noted that fighting terrorism and protecting the rights of the people of this country, far from foreign interference, is at the top of Iran’s priorities.

Amirabdollahian went on to say that participating in rebuilding Syria and encouraging Syrian refugees to return to their homes was an important topic discussed in last night’s summit and in his meeting with Mikdad which was held earlier on Wednesday.

“In recent years we have witnessed the looting of Syria’s natural resources in this part, where the presence of the American occupation has shaped the situation there.”

“We believe that US military forces should be unconditionally and urgently withdrawn from Syria,” he added.

The Syrian Foreign Minister, for his part, said, “We will not allow any party to enter the Syrian territories,” adding that it is not beneficial for Turkey or any country except Turkey to enter the borders of Syria.

Mikdad also appreciated Iran’s efforts in the final statement, which emphasized the territorial integrity, sovereignty and independence of Syria.

“We had experiences in this field during which the Turkish economy witnessed prosperity and also the Syrian economy witnessed similar leaps, but interference in internal affairs and sending hundreds of thousands of terrorists to Syria stopped these relations, which prevented the development of relations, and this is what the US and the Israeli regime want. We are ready to defend the freedom of our nation and we will not fail to do so,” Mikdad stressed.

Criticizing the US government’s acts in plundering the Syrian wealth, the Syrian top diplomat noted, “We are ready for coordination between Arab countries and cooperation with friends and allies, especially Iran, to reach peaceful solutions. This is what Western countries are against because they impose sanctions against Iran, the Syrian nation, and Russia. Today’s world is interconnected.”