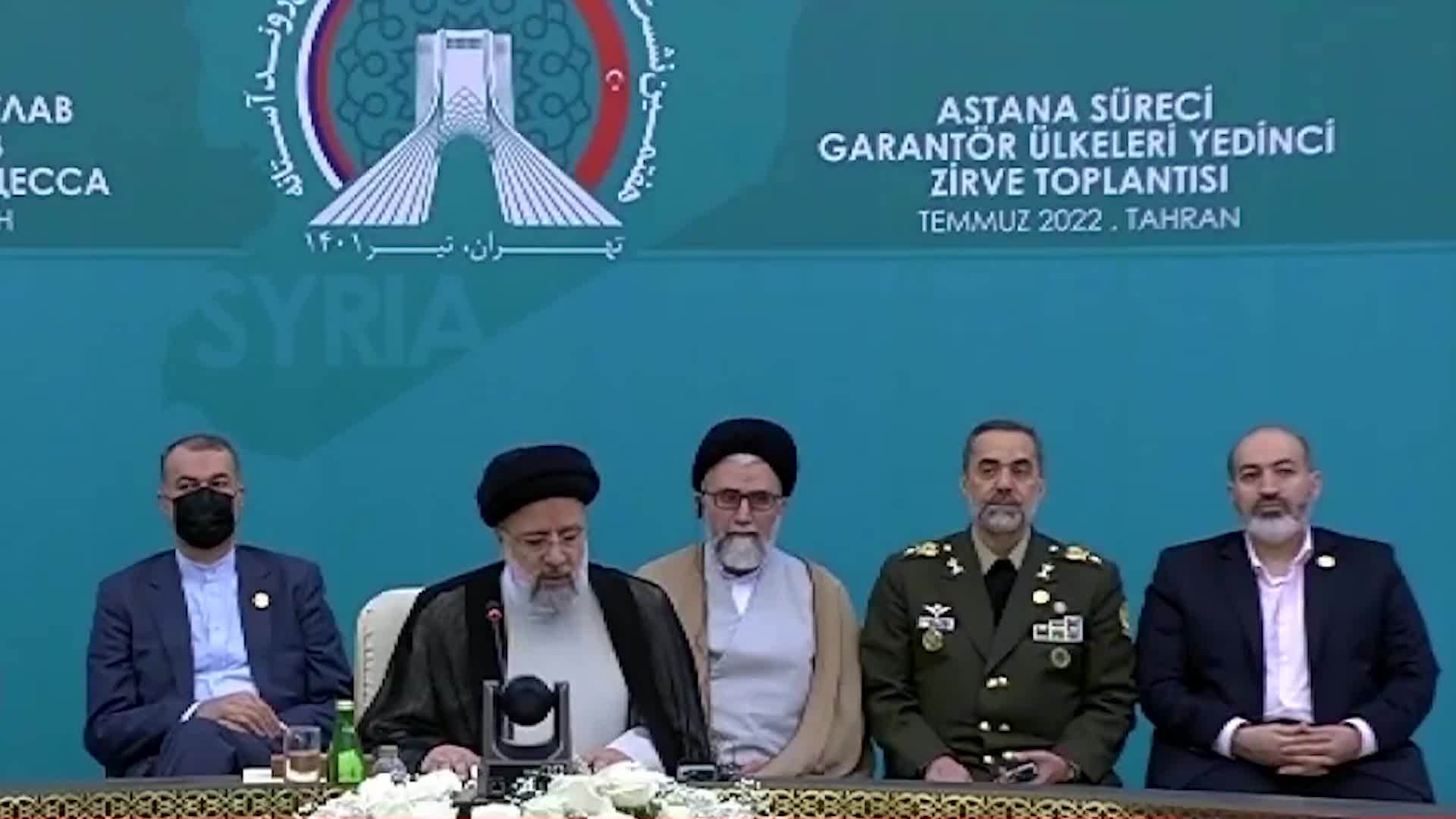 “Unilateral sanctions and economic terrorism violate international law and the sovereignty of countries, and the Islamic Republic of Iran, while condemning any sanctions against nations, especially the Syrian nation, declares that it will continue to support the people and government of Syria with greater strength,” Raisi said, speaking on Tuesday evening at the beginning of the 7th Summit of the Guarantor States of the Astana Process at the Tehran Summit Hall.

The full text of the president’s speech at the summit is as follows;

“In the name of Allah, the Most Beneficent, the Most Merciful

Praise be to God, Lord of the Worlds, and peace and blessings be upon our Master, Prophet Muhammad, his Pure Progeny, and his chosen companions

First of all, I would like to express my appreciation and thanks to the honorable presidents, Mr Putin, the Honorable President of the friendly country of Russia, and Mr Erdogan, the Honorable President of the friendly and brotherly country of Turkey for accepting the invitation of the Islamic Republic of Iran and attending the 7th Summit of the Guarantor States of the Astana Process.

I believe that the Astana Process, as a successful framework for the peaceful settlement of the Syrian crisis, has achieved very good achievements, and its preservation and development is the duty of us three friendly and neighboring countries as its guarantors.

First of all, I would like to emphasize the basic and unchangeable principles we share on the topic of Syria, which is the need to maintain territorial integrity and cohesion, respect for the national sovereignty and independence of the Syrian Arab Republic, and determine the fate of this country only by the hands of its people through Syrian-Syrian dialogues and without foreign interference.

Today, about 11 years have passed since the beginning of the Syrian crisis, the Islamic Republic of Iran still believes that the only solution to the Syrian crisis is political, and military action is not only ineffective, but will worsen the situation.

In the past, as Guarantor States of the Astana Process, we have always supported the political solution within the framework of the agreements reached, including holding the Syrian constitutional negotiations, and we emphasized our determination to fight terrorism in its various forms in the entire region, including Syria, and we continue to believe that the determination of the leaders of the countries that guarantee the Astana Process is to carry forward the past agreements.

Right now, we are holding the summit of the Astana process, while unilateral sanctions, especially by the United States, have put additional pressure on the Syrian people and deprived them of the possibility of a normal life, and it has become clear to everyone that the parties who did not succeed by creating insecurity and instability in Syria to achieve their political goals, are now seeking to fulfill their illegitimate demands through other methods and with the policy of sanctions and pressure.

Unilateral sanctions and economic terrorism violate international law and the sovereignty of countries, and the Islamic Republic of Iran, while condemning any sanctions against nations, especially the Syrian nation, declares that it will continue to support the people and government of Syria with greater strength.

The issue of Syrian refugees and domestically displaced people is a very important issue, and the countries of the region and the international community should help the refugees return to their homes. We are well aware of the problems and concerns of Syria’s neighboring countries in this regard, and we support any efforts and initiatives in this regard.

We believe that making humanitarian aid conditional on the realization of the political goals of some Western countries and the Zionist Regime will disrupt this process, and in this regard, we demand more serious attention and action from the international community.

The only way to establish stability and security in Syria’s borders with its neighboring countries is the powerful presence of this country’s army at the borders and its cooperation with neighboring governments. Numerous experiences have shown that the violation of the territorial integrity of Syria has not helped to establish security and fight against terrorism, so respect for the national sovereignty and independence of the original Syria is inviolable.

A united, independent Syria without illegal foreign presence will not only lead to the return of peace to the people of this country after years of suffering, but will also contribute to the stability and security of its neighbors. The illegal presence of the occupying forces of the American regime has become a destabilizing factor for Syria and the region. America, while increasing illegal military bases, is looting Syria’s natural resources, especially their oil, and I emphasize that it is necessary for the country’s forces to withdraw from the entire region, including Syria, as soon as possible.

We also strongly condemn the increase in the scope of the Zionist Regime’s encroachments on Syrian territory and the targeting of the country’s basic infrastructure, including airports and ports. It has become clear to everyone that this regime has linked its survival to aggression and insecurity in our region, and such actions, along with the occupation of the Golan region, are a violation of the sovereignty of the Syrian state and a factor of instability and a threat to regional and international peace and security, the consequences of which will of course be faced by this occupying regime.

The United Nations Security Council and the respected Secretary General must fulfill their duties in this field before the aggression of the Zionist Regime becomes a major security problem.

At the end, I hope that constructive and useful decisions will be made in this meeting, by taking advantage of which we can witness the continuation and strengthening of the peace process in Syria and sustainable happiness for its honorable people. I sincerely thank you for your attention.”