Raisi at Russia’s State Duma: US strategy of domination failed, US in its weakest position 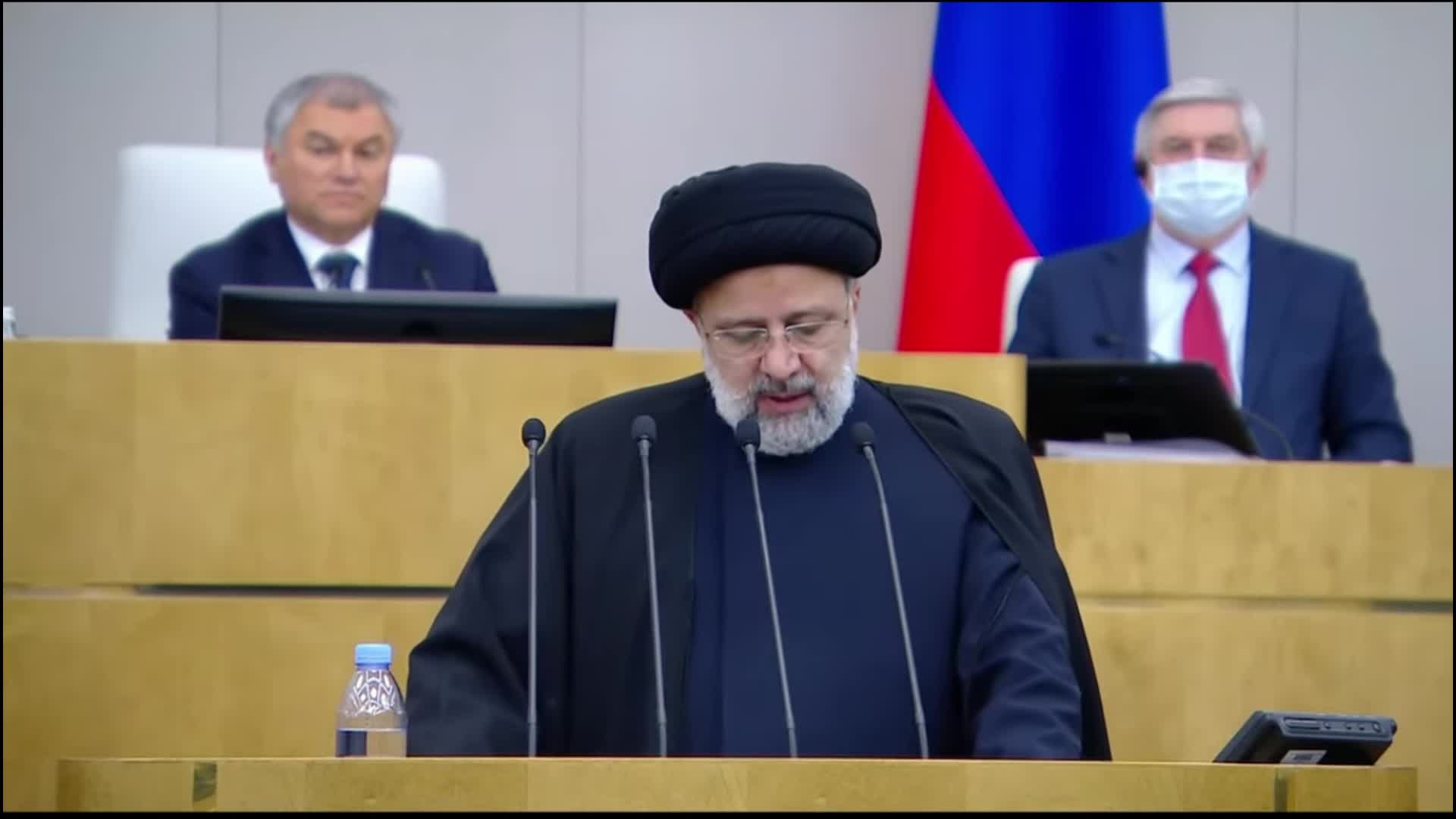 Iranian President Ebrahim Raisi said US strategy of domination has now failed and the United States is in its weakest position, adding that the power of independent nations is experiencing its historic growth.

Raisi made his remarks on Thursday addressing the State Duma of Russia.

He said “The most important goal of this agenda is to weaken independent governments from within, which is pursued through economic sanctions, destabilization, the promotion of insecurity, and false narratives of events; In such a way that they try to change the place of the oppressor and the oppressed in public opinion.”

Raisi added that the Islamic Republic of Iran seeks “maximum interaction” with all countries around the world, especially its neighbors and allies”.

The full text of President Raisi’s speech is as follows:

In the name of God, the Most Beneficent, the Most Merciful

Honorable Chairman of the State Duma of Russia,

At the outset, I would like to express my satisfaction with the friendly government and nation of the Russian Federation for the warm welcome and hospitality of me and my accompanying delegation in the beautiful city of Moscow.

I seize the opportunity to congratulate the Russian nation and government on the birthday of Jesus Christ and the New Year. The people of Iran and the World of Islam respect Jesus Christ and his pure mother, Saint Mary, and based on the teachings of the Quran, believe that the most important common message of all Abrahamic religions is the spiritual development of humanity through worship of the Lord of the Worlds, which in itself promotes peace and intimacy and the emergence of God-loving and, consequently, human societies. At the same time, worshiping God always takes its meaning from avoiding obedience and worshiping any entity other than God.

As I mentioned in a cordial meeting and constructive conversation with Mr. Volodin, when the Russian political delegation attended my inauguration; the Islamic Republic of Iran has the necessary will and readiness to develop and expand relations with the Russian Federation.

Today, fortunately, there are very clear horizons for cooperation between the two countries at the bilateral, regional, and international levels. Strengthening Iran-Russia relations in bilateral and multilateral forms will boost the economies of the two nations and strengthen regional and international security. The abundant, yet complementary economic and trade capacities of the two countries, along with the power and influence of each of our two countries in their geographical areas, can strengthen the convergence between the regions.

The Islamic Republic of Iran seeks “maximum interaction” with all countries around the world, especially its neighbors and allies. The purpose and basis of this cooperation and interaction is the mutual interests of nations and the increasing formation of a “civilised global community”. This path can be achieved through the cooperation of independent countries with high cultures and attention to the principles of “justice, morality and spirituality”. Undoubtedly, the root of what human society suffers from today is the separation of politics from morality and spirituality. Violence, terrorism, the collapse of the family institution, and the spread of drugs do not come from a spiritualist mindset. Any structure created on the basis of this segregation intensifies the suffering of humanity and, instead of promoting justice, structures oppression and creates the roots causes of domination.

The experience of an international system based on domination shows that its output was nothing but war, violence, insecurity, and division among nations. The failure of the policy of military occupation and forcing the United States to flee Iraq and Afghanistan stems from one concept: resistance of nations. The idea of ​​resistance serves the independence of countries. In modern times, the concept of resistance plays a central role in deterrence equations. The successful model of cooperation between Iran and Russia in Syria has also ensured the independence of the countries and the consolidation of regional security in the continuation of the resistance of the Syrian people and government. In this regard, we have enjoyed the cooperation of the Russian Federation with the intelligent leadership of Mr. Putin, which is commendable and can be considered an effective model for the development of cooperation in various fields.

However, the war on terrorism has been part of the war on hegemony; because terrorism is one of the by-products of hegemony. The strategy of domination has now failed, the United States is in its weakest position, and the power of independent nations is experiencing its historic growth. The important thing in this age, which requires vigilance, is that the desires for domination have not disappeared and new forms of domination are on the agenda. The most important goal of this agenda is to weaken independent governments from within, which is pursued through economic sanctions, destabilization, the promotion of insecurity, and false narratives of events; In such a way that they try to change the place of the oppressor and the oppressed in public opinion.

The “evil alliance” of the United States with terrorists is clear to the world, especially to the nations of West Asia, from Syria to Afghanistan. There are now complex plans to send takfiri terrorists on new missions from the Caucasus to Central Asia. Experience has shown that it is pure Islamic thought that can prevent the formation of extremism and takfiri terrorism.

NATO, on the other hand, seeks to infiltrate various geographical areas with new coverings that threaten the common interests of independent states. Promoting pro-Western governments and confronting independent democracies based on national identities and traditions is part of NATO’s cultural projects that reflect the hypocrisy of this diminishing pattern of behavior.

Sanctioning nations is a common form of new domination, and countering it requires the cooperation of independent states and collective response. Otherwise, sanctions will affect all countries, even US allies, under various pretexts. The United States claims that the sanctions are due to the Islamic Republic of Iran’s nuclear activities. Everyone knows that these activities are legal and under the constant supervision of the International Atomic Energy Agency. But the reality is that in different historical periods of Iran’s development, whenever our nation has raised the banner of nationalism, independence, or scientific development, it has faced sanctions and pressures of the Iranian nation’s enemies.

The policy of the Islamic Republic of Iran, according to the fatwa of the Supreme Leader of the Islamic Revolution, is that we are not looking for a nuclear weapon, and such weapons have no place in our defence strategy. America seeks to oppose the rights of our nation. Our philosophy is also clear: “We do not relinquish the rights of our nation”. Those chanting, “America is back” have not yet fulfilled their obligations under the nuclear deal. We are not satisfied with anything less than our rights. The Islamic Republic of Iran is serious about reaching an agreement if the other parties are serious about lifting the sanctions effectively and operationally.

The policy of maximum interaction of the Islamic Republic of Iran with independent governments is original and will continue regardless of the developments in the international environment. The Islamic Republic of Iran is the winner of two battlefields against terrorism and the campaign of maximum economic pressure. At the same time, the Islamic Republic of Iran has extensive economic potential, especially in the fields of energy, trade, agriculture, industry, and technology, which pave the way for beneficial cooperation for any bilateral or multilateral interaction with different countries. In this regard, basic agreements were reached between the Islamic Republic of Iran and the Russian Federation, which will cause a significant leap in bilateral economic relations for the benefit of the two nations and effective regional cooperation for the benefit of peace and stability of nations in different regions. The privileged geographical location of Iran, especially the north-south corridor, can make trade from India to Russia and Europe less expensive and more prosperous. Stabilizing and benefiting the relations between the two countries requires the expansion of cooperation in the fields of science, society, culture, and media, and we are ready for the maximum development of stable and long-term relations. To this end, we believe that the relations between the two countries should be designed in such a way that, while providing mutual benefits, they are also safe from the interference of third parties.

The Islamic Republic of Iran considers and supports Russia’s initiative to hold a meeting of the Speakers of the Parliaments of Iran, Russia, Turkey, Pakistan, and China in the fight against terrorism.

I sincerely appreciate your kind attention.