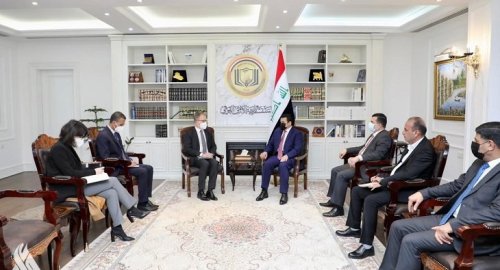 Al-Araji received in his office the new Italian ambassador in Baghdad, Maurizzo Cricante and welcomed him in Baghdad.

He wished him success in his work as an ambassador in Iraq, stressing the importance of strengthening the distinguished relations and joint cooperation between the two countries.

Al-Araji praised “Italy’s stances towards Iraq and the continuous support in the fight against terrorism and the humanitarian file”.

For his part, the Italian ambassador said that “his country provided support to Iraq in the war against Daesh terrorist gangs, and will also provide assistance, through NATO, because it will chair the alliance in the fifth month of this year”.

He further stressed “his country’s interest in this cooperation through advisers and training the security forces, especially the Federal Police units of the Ministry of Interior”.

The statement included that the Italian ambassador “valued Iraq’s role in conducting a dialogue with neighboring countries,” as he praised holding of the conference hosted by Baghdad recently.

The National Security Adviser noted that “Iraq is not part of Iran-US dispute,” stressing that “Iraq seeks to conduct direct dialogues on land, and continues the policy of openness to the countries of the world and adopting a policy of directly solving crises”.