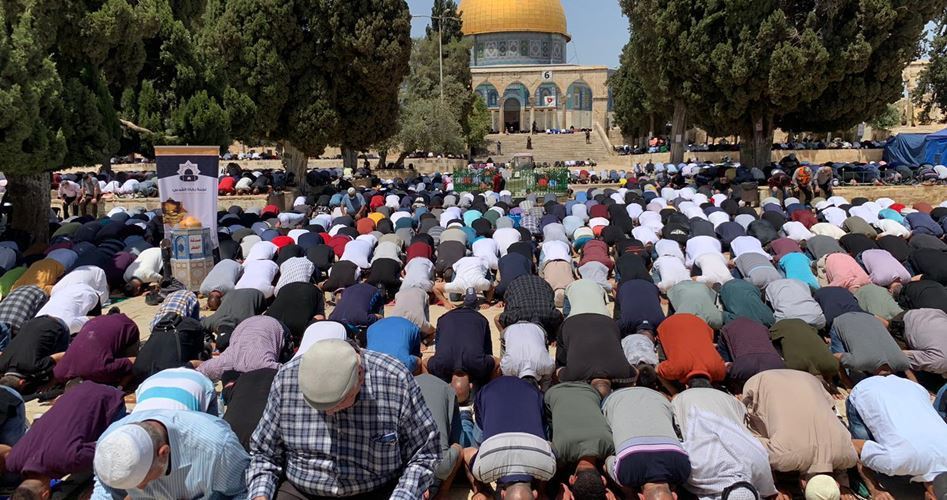 Tens of thousands of Palestinians performed Friday prayer at the Aqsa Mosque in Occupied Jerusalem.

Local sources said that more than 55,000 Palestinians managed to perform Friday prayers at the Aqsa amid strict Israeli police restrictions.

Photos of the martyr Ibrahim al-Nabulsi, who was killed by Israeli troops during Nablus military raid, were raised among the worshipers.

Israeli police forces were earlier deployed in large numbers throughout the occupied city and near al-Aqsa’s gates.

Hundreds of worshipers were stopped and searched at the entrances to the Mosque.

During the Friday sermon, the preacher of the Aqsa, Sheikh Yusef Abu Sneina, warned of the dangerous targeting of Palestinians and their properties in the Occupied Jerusalem.

He further stressed that the Palestinian people will not be defeated, saying that the Aqsa Mosque will remain purely Islamic.

Earlier in the morning, thousands performed dawn prayer at the Aqsa Mosque despite Israeli restrictions.

Since the early hours of dawn, thousands of Palestinians gathered at the gates of the site to pray, confirming the Palestinians’ spiritual links to the holy site.

Similar gatherings were also reported in Nablus, al-Khalil, Tulkarem, and Jenin, amid the participation of Palestinian martyrs and prisoners’ families.