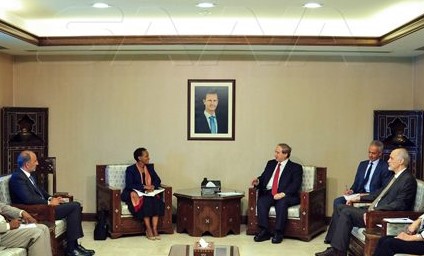 Syria’s Foreign and Expatriates Minister Faysal Mikdad discussed with the Assistant Secretary-General for Humanitarian Affairs Joyce Msuya and the accompanying delegation the role of the United Nations in the humanitarian response to the situation in Syria.

They also discussed and the activities carried out by the Office for the Coordination of Humanitarian Aid (OCHA) and the international organizations active in humanitarian field and various aspects of the humanitarian efforts of the United Nations and its agencies in Syria.

Mikdad condemned Western countries’ politicization of humanitarian aid by in pursuit of political goals, and stressed the importance of adhering to the principles of humanitarian work in Syria and commitment to neutrality and independence, which contributes to securing basic services and delivering aid to its actual beneficiaries from inside Syria within the framework of full respect for Syria’s sovereignty and territorial integrity in accordance with relevant Security Council resolutions.

Mikdad also explained the inhumane effects of the unilateral coercive measures imposed by the United States and its Western allies on the Syrian people.

The Syrian minister said that these measures are not imposed only against the Syrian government’s efforts to secure medicines, medical equipment, water and basic services, but are also against the Syrian people, whose suffering has increased as a result of these immoral policies which contradict International Law and the Charter of the United Nations.

She hailed the Syrian government for the facilities provided to accomplish the work of the Office for the Coordination of Humanitarian Affairs.

“I am looking forward to improve work mechanisms that lead to strengthening cooperation and coordination in all of these fields,” she added.

Msuya further noted that her visit to Syria “comes within the framework of her keenness to closely review the relief and response efforts undertaken by the United Nations and to reach conclusions based on facts with the aim of developing a realistic vision of the needs of the Syrian people”.

Msuya affirmed her readiness to discuss the difficulties facing the work of humanitarian organizations in Syria with the Syrian government in order to reach a common vision to overcome the obstacles that hinder humanitarian work in Syria and distance it from political considerations.