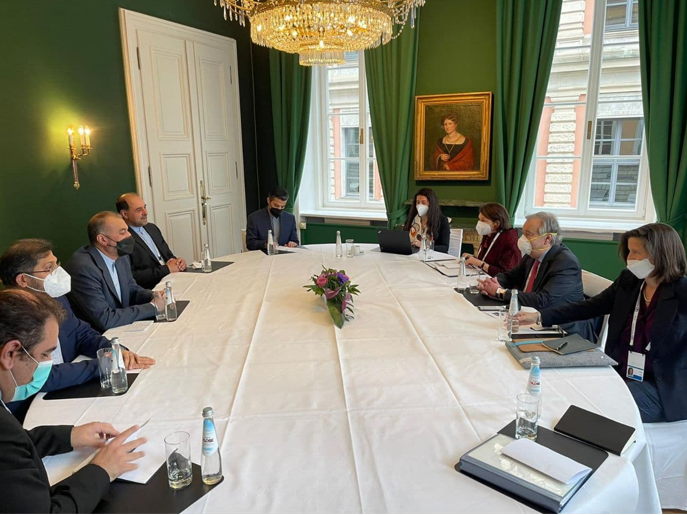 Iranian Foreign Minister Hossein Amir-Abdollahian and UN Secretary-General Antonio Guterres discussed the ongoing Vienna talks, the situation in Yemen, which is constantly subject to Saudi aggression and bombardment, and several other issues.

The two sides discussed the aforementioned affairs on the sidelines of the Munich Security Conference, and the top Iranian diplomat said regular talks and consultations helped the two sides come closer to each other in terms of their view on various issues, talking about the situation in Yemen and Afghanistan, not to mention the talks to revive the JCPOA.

Amir-Abdollahian stressed that the UN and the international community needed to continue delivering aid to the Afghan people, highlighting that the formation of an inclusive Afghan government would help Kabul with resolving many of Afghanistan’s problems.

He also highlighted that the continuing influx of Afghan refugees to Iran and Afghanistan being exposed to terrorism, refugees, and drug production and trafficking jeopardized the stability and security of the wider region and the whole world.

He called on the UN chief to expand his agency’s assistance and the services of the UN High Commissioner for Refugees to the countries surrounding Afghanistan, underscoring Iran.

Regarding Yemen, Amir-Abdollahian said the issue had reached a critical point, calling for an increase in the political efforts to resolve the crisis and avert the continuation of the humanitarian catastrophe.

The diplomat noted that the United Nations Secretary-General had a very pivotal role in the Yemeni crisis, calling on him to resolve the crisis and end the Saudi aggression and war on the country.

On the Vienna talks, the Iranian foreign minister underlined how serious and intense the talks were, adding that there had been significant progress. However, he saw that the other side was yet to make serious political decisions and show tangible determination to safeguard Iran’s rights and interests.

The UN Secretary-General thanked Iran for its approach toward the influx of refugees from Afghanistan, underscoring that the international agency was well aware that the humanitarian aid delivered to Iran was inadequate in terms of quantity and quality.

He also addressed the international community’s concerns over terrorism in Afghanistan and the country’s humanitarian issues such as the realization of the right to education for women and girls.

Guterres went on to reaffirm Tehran’s humanitarian views and concerns regarding the crisis and the ongoing war on Yemen, noting that the continuation of this humanitarian catastrophe was not worthy of the world. He also underlined that peace and stability must be restored to Yemen, the Yemeni people, and the entire region.