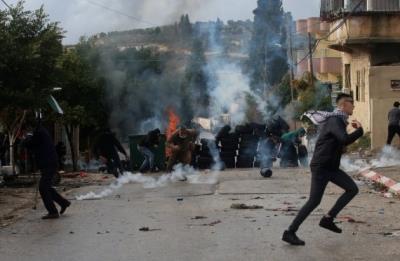 According to the Palestine Red Crescent, dozens of Palestinians, including four journalists, were injured during clashes that erupted in the vicinity of Jabal Sobeih area in Beita, south of Nablus.

The Palestinian Red crescent crews said they treated 71 casualties including 5 who were hit with rubber-coated metal bullets and 57 who suffered from breathing problems.

The clashes broke out after IOF soldiers stormed the area to provide protection for a settlers’ planned march in Jabal Sobeih. The soldiers fired teargas and sound bombs at the protesters.

In the meantime, mosques called on residents to intensify presence in the Jabal Sobeih area to fight the takeover of their land by Jewish settlers, who are currently building an illegal settlement and threatening the livelihoods of at least 17 Palestinian families who depend on harvesting their olives on land they have owned there for generations.

Similar clashes broke out Beit Dajan in Nablus, where 16 Palestinians were injured, including two who were hit with metal bullets.

On the other hand, a young man was shot and injured in Bethlehem clashes.  Dozens suffered from teargas inhalation due to the intensive use of teargas bombs on the part of the IOF.

Palestinian media reports said scores of Palestinians suffered breathing difficulties due to inhaling tear gas fired by the IOF soldiers during the clashes.

A 15-year-old boy was arrested as clashes erupted in Arqa village in western Jenin, while violent confrontations broke out in al-Khalil.