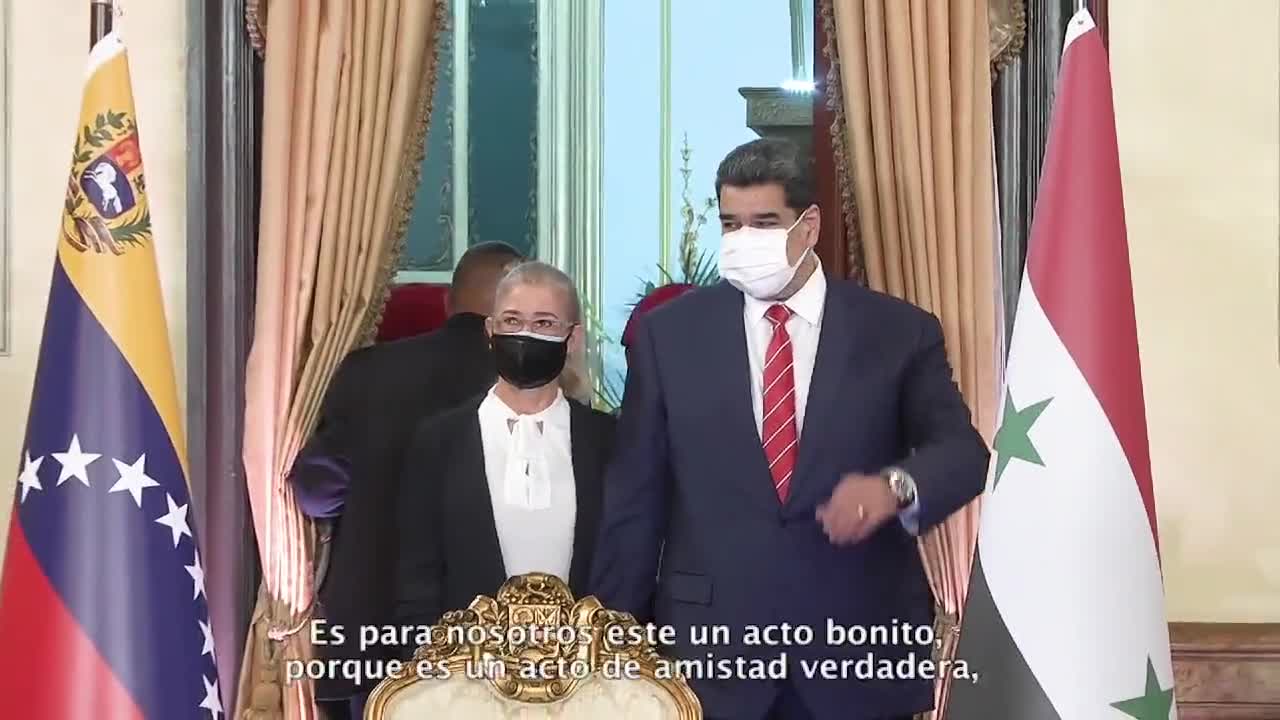 Venezuelan President Nicolas Maduro announced that he will visit Syria soon to celebrate with the Syrian people and their leadership the atmosphere of peace and stability that they managed to reach after facing the terrorist aggression launched against their country.

Maduro’s remarks came while awarding Syria’s Ambassador in Caracas Khalil Bitar the First Class Order of Merit Francisco de Miranda on the occasion of the end of his duties.

“Awarding the Order of Merit to Ambassador Bitar reflects the common friendship and mutual admiration between the peoples of Venezuela and Syria, who are anti-imperialism and anti-terrorism, and who aspire to peace for common prosperity and economic growth,” Maduro said.

He added “We admire the history of the Syrian people and their heroism, determination and struggle against terrorist organizations. We commend the courage of President Bashar al-Assad and salute his heroic stance as he led a historic battle against the US terrorist aggression and its accomplices in the world and achieved victory thanks to the help of his allies such as Russia, China, Iran and other anti-imperialism peoples and with Venezuela’s moral and spiritual support.”

Maduro called for respecting Syria’s right to reconstruction and prosperity, stressing that it is the center of cultures.

The Venezuelan President proposed the idea of holding an economic and investment exhibition in Damascus for all Venezuelan businessmen and the Syrian community in Venezuela to affirm the readiness to assist in the reconstruction and he tasked the Minister of Foreign Affairs with preparing for that and inviting businessmen.

For his part, Ambassador Bitar, in a similar speech, thanked the government of the Bolivarian Republic of Venezuela and President Maduro personally for awarding him the first class order of merit.

He stressed that he will always have affection and appreciation of the Venezuelan Republic, leadership and people.

Bitar shed light on the diplomatic relations that have linked the two countries for more than seven decades and the qualitative development they achieved under the leadership of President al-Assad and the late leader Hugo Chavez, which has continued with President Nicolas Maduro.

Bitar noted that Syria is waiting for President Maduro’s visit to learn about the achievements made in the field of reconstruction and the opportunities offered by this new phase in advancing bilateral relations.

He highlighted the importance of friendship between the two countries and peoples in their struggle for their just causes and the independence and sovereignty of their countries and the struggle against imperialism and its unjust unilateral coercive economic measures.

The ceremony of awarding the order of merit, which took place at the Republican Palace, was attended by Venezuelan Foreign Minister Felix Plasencia and his deputies, ambassadors of friendly countries, members of the Syrian Embassy in Caracas, and a number of members of the Syrian community.