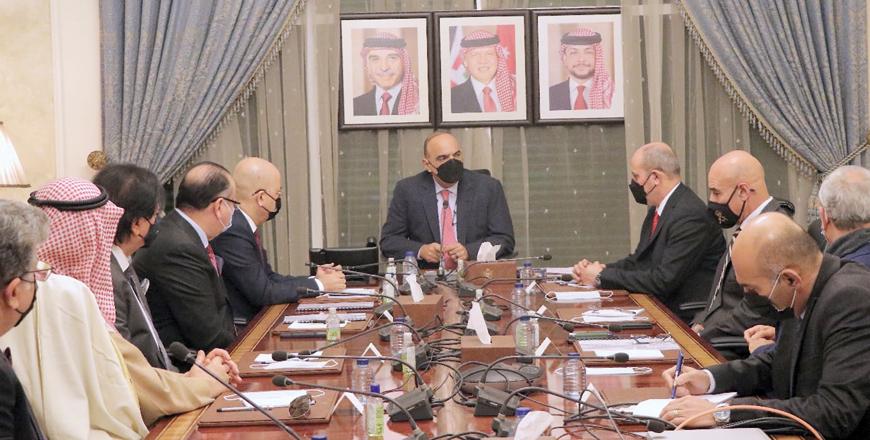 Al Khasawneh on Monday received President of the Iraqi Business Council in Jordan Majed Saidi and council members during which he stressed the important role of the council in enhancing Jordanian-Iraqi economic ties.

Khasawneh stressed that King Abdullah pays great attention to investment and always seeks to enhance relations with Iraq bilaterally and within the Jordanian-Iraqi-Egyptian cooperation in all fields, expressing hope to speed up procedures of implementing joint ventures.

The premier also referred to the recent decision by the Iraqi Council of Representatives to approve the framework agreement of the project to install the Iraqi crude oil pipeline from Basra to Aqaba, calling for speeding up work procedures in the industrial sector at the borders.

He also voiced the government’s keenness to remove any obstacles facing investors in Jordan and to attract more Arab and foreign investments to the Kingdom, in addition to its keenness to review paused projects.

The prime minister also said that the government is committed to empowering the local, Arab and foreign private sectors to enhance existing investments and address problems they face in a bid to increase GDP and reduce unemployment rates.

Saidi said that Jordan is considered an investment attractive area, where officials in the Kingdom always seek to meet with Iraqi investors to overcome challenges and obstacles they face.

He also said that Iraqi investments in Jordan, despite the repercussions of the pandemic, are still existing, stressing Iraqi investors’ endeavours to further enhance and expand their investments to develop the Jordanian economy and create jobs.

Jordan’s King Says He Would Support a ‘Middle East Nato’