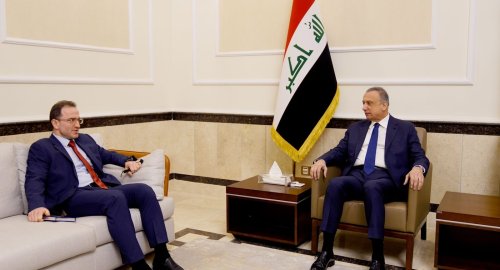 Iraq’s Prime Minister Mustafa Al-Kadhimi affirmed Iraq’s keenness to establish the best bilateral relations with Russia as he received the Ambassador of the Russian Federation to Iraq.

During the meeting which was held on Wednesday, Al-Kazemi stressed “Iraq’s keenness to establish the best bilateral relations with Russia, in various fields, for the interest of the two friendly peoples,” lauding the “positive coordination between the two countries in international forums.”

The Russian ambassador, for his part, conveyed to the Prime Minister the greetings of the Russian leadership and its aspiration for more constructive cooperation with Iraq.

Elbrus Kutrashev praised the important steps taken by the Iraqi government in the areas of reform as Iraq’s efforts to promote openness, stability and calm at the regional level.