Salih: Iraq has achieved an important openness to neighboring countries and the region 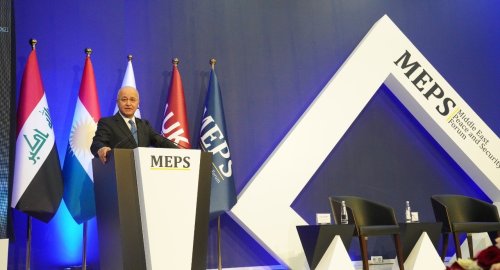 Iraq’s President Barham Salih expressed hope that the elections would end with legal and constitutional results, while stressing the need to solve outstanding problems between the federal government and the Kurdistan Region.

“We hope that the elections will end with legal and constitutional results and come out with the formation of a government that meets the rights of Iraqis to a free and dignified life,” Salih said on Tuesday in a speech at the Middle East Peace and Security Forum.

“There is a problem in establishing good governance and the way the state is functioning,” he said, adding “The Middle East is in a transitional and decisive phase, and the center of this phase its balance element is Iraq and what will happen in it have major consequences for the whole region.”

“Iraq is a meeting point for Arabs, Kurds, Shiites, Sunnis and other sects, and a regional point of communication between the human blocs of Arabs, Persians and Turks,” Salih said in a statement.

“Iraq has achieved an important openness to neighboring countries and the region, and the countries of the region have met in Baghdad, which have their own differences, but today they agree that a stable Iraq serves their interests,” the president added.