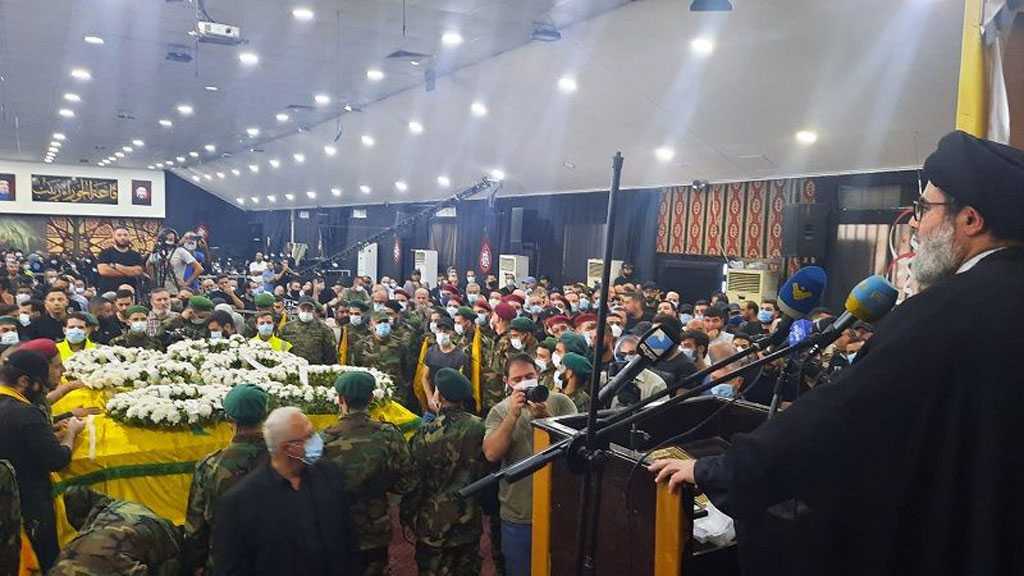 Head of Hezbollah Executive Council Sayed Hashem Safieddine slammed the “coward militiamen” of the “Lebanese Forces” saying that they do not dare to confront Hezbollah who have defeated the Israeli enemy and the US plots in the region.

Delivering a speech during Hezbollah funeral of a number of Tayouneh martyrs in Beirut’s Dahiyeh, Sayed Safieddine stressed on Friday that the “Lebanese Forces” Party itself committed the massacre against the civilians and peaceful protesters in Tayouneh area on Thursday.

He indicated that the peaceful protest was a normal event held to express a certain stance against the politicization of the Beirut Port probe and that it could have ended regularly.

However, the massacre which was committed by the “Lebanese Forces” was earlier planned, Sayed Safieddine added.

He explained that Hezbollah had prior knowledge about the militia movement in Tayouneh area and coordinated the protest with the Lebanese Army, noting that the Army may not have been able to obtain the necessary data about the “Lebanese Forces” decision to attack the protesters.

“Who committed this unspeakable crime was the Lebanese Forces which would be held responsible before the martyrs’ blood.”

Sayed Safieddine indicated that the coward militiamen of the “Lebanese Forces” do not dare to confront those men and women who have defeated the Israeli enemy and the US plots in the region, so that they attacked the civilians to lead Lebanon into a civil war.

“Hezbollah Resistance will stay powerful and nothing can undermine its might.”

The “Lebanese Forces” Party has unveiled its reality because its may be ordered by its defeated regional masters to ignite the civil war in Lebanon, Sayed Safieddine said, adding that Tayouneh crime is one of the US plots funded by some Arab states.

Sayed Safieddine further stressed that Hezbollah would not be dragged into a civil war, but that the martyrs’ blood will never go in vain.

In this regard, Sayed Safieddine indicated that Tayouneh martyrs protected the entire nation from the “Lebanese Forces” sedition, stressing that Hezbollah will pursue the case of the Tayouneh martyrs till their rights get restored.

Sayed Safieddine called on everyone in Lebanon to express a clear attitude towards the “Lebanese Forces” plot t lead Lebanon into a civil war to serve the interests of the United States and some Arab regimes.

Militants affiliated with Lebanese Forces Party on Thursday ambushed civilians heading to the Justice Palace to protest against politicization of investigation into Beirut Port blast. Six Lebanese people were killed and dozens injured as snipers opened fire at civilians.

It is worth noting that the funeral was held in Ghobeiry town for the martyrs Mariam Farhat, Ali Ibrahim, and Hasan Al-Sayyed who were laid to rest at the Rawdat Shahidayn Cemetery. Sayed Safieddine led the prayers at the funeral service.