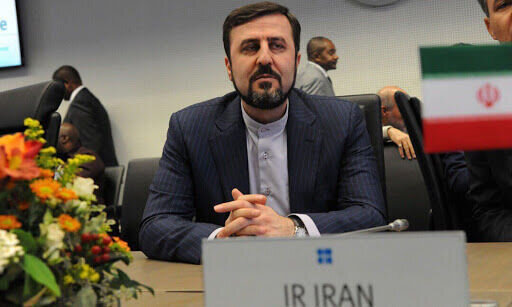 Iran’s Ambassador to the International Organization in Vienna warned that the UN watchdog’s counterproductive and hasty approach towards Iran could be a hurdle against future interactions based on good faith.

Addressing a meeting of the IAEA Board of Governors in Vienna on Wednesday, Kazem Gharibabadi urged the International Atomic Energy Agency to find effective measures in order to tackle the problem of sabotages in nuclear facilities, stressing that the agency should decide to resolve a paradoxical approach and take clear position in this regard.

He noted that the United States initially violated UNSCR 2231, by unilaterally withdrawing from the JCPOA and adopting the failed “maximum pressure” policy and re-imposing sanctions to directly and adversely affect the normalization of trade and economic relations with Iran.

“Now, more than three years have passed since the illegal withdrawal of US from the deal, and only in December 2020, the Parliament of the Islamic Republic of Iran passed a law which required the Government to stop the implementation of all verification and monitoring activities beyond Iran’s Comprehensive Safeguards Agreement (CSA), including the provisional implementation of the Additional Protocol (AP). The requirements envisaged in the law were not met in the appropriate time frame and as a result, the government of Iran was obliged to implement the law and the remedial measures therein.”

He continued “I note with regret and consternation the statements of some JCPOA participants and European states. It is as if they misremember the fact that it was Iran who fully complied with its commitments under the deal while, due to the US outlaw behavior and actions and EU/E3’s miserable negligence, was not and still is not benefiting from it.”

Gharibabadi further reiterated on this point that until the sanctions on Iran are not removed, no one should expect more forbearance form Iran, adding that Iran has engaged seriously and meaningfully in negotiations with the JCPOA participants to address the issues resulting from the US withdrawal.

“In this framework, as it is stated by our president and minister of foreign affairs, Iran is of the view that the negotiations should be result oriented. It is important that the outcome of these efforts ensure that all sanctions are lifted in an effective and verifiable manner, we do not want to face, once again, the catastrophe in which the US withdraws from the agreement or abuses the mechanisms in the JCPOA and violates all of its commitments therein while Iran is in full compliance with the provisions of the deal.”

He went on to say “It is yet to be observed whether the current US administration is serious enough and ready to abandon the United States’ addiction to use unilateral coercive measures, respect international law, implement its sanctions lifting commitments in a full and effective manner and take all necessary decisions that this might entail. It is crucial that the US stop violating its obligations under the deal and the UNSC Resolution 2231 without further delay and any pre-conditions.”

The Iranian ambassador affirmed that Iran’s commitments under the deal are beyond its obligations and therefore, implementation of remedial measures by Islamic Republic of Iran under its rights enshrined in the deal, is not hampering those obligations.

“In this vein, Director General’s report that the Agency’s verification and monitoring activities have been seriously undermined, should be seen in its appropriate context that is related to the obligations beyond CSA.”

In this context, Gharibabadi said “it should be noted that the Director General’s statement in his report regarding “Iran’s failure to respond to the Agency’s requests for access to its monitoring equipment is seriously compromising the Agency’s technical capability to maintain continuity of knowledge” and requesting Iran to rectify the situation, is not related to the safeguards obligations, since it is in the realm of implementation of the JCPOA which Iran suspended based on its rights under paragraphs 26 and 36 of the deal. Furthermore, data recording was a political decision by Iran to facilitate, including inter alia, the political talks and to help its success and should not be considered as Iran’s obligation in relation with the Agency.”

He then added that the Agency should, alongside taking care of its inspectors, equipment and verification activities, fulfill its responsibilities and obligations with respect to terrorist sabotage acts against civilian and peaceful nuclear facilities of its member states.

“It is imperative to address this issue in the discussions on nuclear security so as to find effective measures in order to tackle the problem of sabotages in nuclear facilities, and the Agency should decide to resolve this paradoxical approach and take clear position in this regard.”