Biden: US will not walk away from Middle East and leave vacuum to be filled by Russia, China or Iran 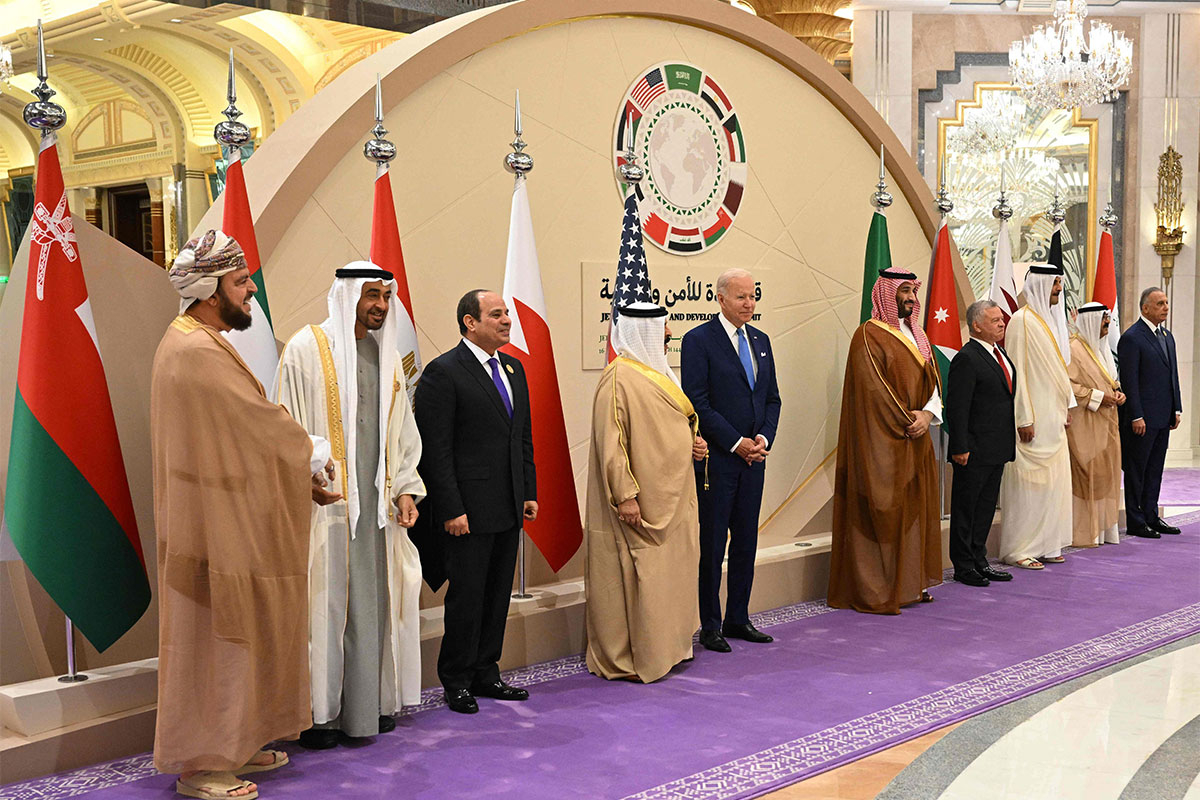 The United States “will not walk away” from the Middle East and leave a vacuum to be filled by Russia, China or Iran, US President Joe Biden has told a summit in Jeddah, Saudi Arabia.

“We will not walk away and leave a vacuum to be filled by China, Russia or Iran,” Biden said. “We will seek to build on this moment with active, principled, American leadership.”

Although US forces continue to target armed groups in the region and remain deployed at bases throughout the Middle East, Biden suggested that he was turning the page after Washington’s invasions of Iraq and Afghanistan.

“Today, I am proud to be able to say that the eras of land wars in the region, wars that involved huge numbers of American forces, is not under way,” he said.

Biden also pressed his counterparts, many of whom lead repressive governments, to ensure human rights, including women’s rights, and allow their citizens to speak openly.

“The future will be won by the countries that unleash the full potential of their populations,” he said, including allowing people to “question and criticize leaders without fear of reprisal”.

Following is the full text of the Biden’s speech at Jeddah Summit for Security and Development:

Well, thank you. It’s good to be once more together with so many vital partners and to strengthening our cooperation on the future of this consequential region of the world.

I’d like to thank our Saudi hosts for inviting the United States to join this summit and for their hospitality in welcoming all of us.

A great deal has changed since I visited this region when I served as Vice President of the United States, both on the world stage and in the Middle East.

Around the world, we’re seeing efforts to undermine the rules-based order: with China’s increasingly coercive actions in the Indo-Pacific and beyond; with Russia’s brutal and unprovoked war against its neighboring Ukraine; and with Iran’s destabilizing activities. Here in the Middle East, we’ve also seen critical changes.

For the first time since 9/11, an American President is visiting this region without American troops being engaged in combat — in a combat mission in the region.

We’ll always honor the bravery, the selfishness [sic] — selflessness of the — and the sacrifices of the Americans who served, including my son, Major Beau Biden, who was stationed in Iraq for a year.

And we’ll never forget the memory of the seven thousand fifty- — 7,054 American troops who made the ultimate sacrifice while serving in Iraq, Afghanistan, and elsewhere over the last two decades.

But today, I am proud to be able to say that the era of land wars in the region — wars involving huge numbers of American forces — is not underway.

We — but we maintain both the capacity and the absolute determination to suppress the terrorist threat wherever we find it. We’ve demonstrated that this year — eliminating the Emir of ISIS on a daring operation, and just this week, taking out another key leader of ISIS.

We’re going to continue our counterterrorism efforts working with a broad coalition of countries, including everyone around this table.

And we will turn our attention and our resources to supporting our partners, strengthening our alliances, and building coalitions to solve the problems facing this region and the world — and the world today.

The United States is clear-eyed about the challenges in the Middle East and about where we have the greatest capacity to help drive positive outcomes.

Our objectives are focused on — are — excuse me, are focused, realistic, and achievable so that we can target our resources, rebuild trust, and deliver real results.

And we will operate in the context of the Middle East as it is today: a region more united than it has been in years.

The GCC is a prime example of that. Former rivals have

reestablished diplomatic and economic ties. New memberships are being forged. And increasingly, the world is seeing the Mideast — the Middle East through the lens of opening and opportunity.

Let me state clearly that the United States is going to remain an active, engaged partner in the Middle East.

As the world grows more competitive and the challenges we face more complex, it is only becoming clearer to me that — how closely interwoven America’s interests are with the successes of the Middle East.

We will not walk away and leave a vacuum to be filled by China, Russia, or Iran. And we’ll seek to build on this moment with active, principled American leadership.

Our new framework for the Middle East has five key principles, and I’d like to very briefly share them with you today.

First, the United States will support and strengthen partnerships with countries that subscribe to the rules-based international order. And we will make sure that these — those countries can defend themselves against foreign threats.

The United States and each of the countries around this table are an essential part of that order because we reject the use of brute force to change borders.

When the entire GCC, plus Egypt and Jordan, voted in the United Nations General Assembly to condemn Russia’s invasion of Ukraine, it was a watershed moment. It showed that the core values of sovereignty and territorial integrity are truly universal.

And I want to be clear: Supporting a rules-based order doesn’t mean we always have to agree on every issue, but it does mean we align around core principles that allow us to work together on the most pressing global challenges.

For example, on food security, we are collectively committing billions of dollars to alleviate the crisis here in the region, with more than $1 billion coming from the United States.

On energy security, we agree on the need to ensure adequate supplies to meet global needs. Energy producers have already increased production, and I look forward to seeing what’s coming in the — in the coming months.

And on the climate crisis, we’re collectively investing hundreds of billions of dollars in clean energy initiatives, increasing our climate ambition, and working together to diversify supply chains and invest in critical infrastructure.

And we’re looking forward to Egypt and the UAE hosting the next two major U.N. climate conferences.

Second, the United States will not allow — will not allow foreign or regional powers to jeopardize the freedom of navigation through the Middle East’s waterways, including the Strait of Hormuz and the Bab al-Mandab. Nor will we tolerate efforts by any country to dominate another in the region through military buildups, incursions, and/or threats.

The free flow of commerce and resources through the Middle East is the lifeblood of a global economy. That’s as true today as it been — as it has been for decades.

And when nations adhere to international rules, it works. So my administration has made it a priority to protect those vital waterways.

We’ve established a new naval task force to work in partnership with many of your navies to help secure the Red Sea. That includes the first naval task force to use multi-manned [un-manned] surface vessels and artificial intelligence technology to enhance marine — maritime awareness.

Third, the United States will not just aim to deter threats of regional — to regional stability; we will work to reduce tensions, de-escalate, and end conflicts wherever possible.

This approach is already reaping dividends. As was mentioned: In Yemen, working closely with Saudi Arabia, Oman, the UAE, and the U.N., we forged a truce that is now in its 15th week.

We’ve welcomed the leadership Of Iraqi Prime Minister Kadhimi to bring countries from the nei- — from the neighbor- — from the region together for talks in Baghdad.

Thanks to the months of quiet, persistent diplomacy, we helped finalize an agreement to remove international peacekeepers from Tiran Island in the Red Sea, and transform an area that once sparked wars into a future hub of peaceful tourism and economic development.

And as we continue to work closely with many of you to counter the threats posed by — posed to the region by Iran, we’re also pursuing diplomacy to return constraints on Iran’s nuclear program.

But no matter what, the United States is committed to ensuring that Iran never gets a nuclear weapon.

Integration, interconnection — these are the underlying themes of our meeting today.

How many years have we been trying to connect Iraq’s electricity to the — to the G- — to the GCC grids? I remember being briefed on it in 19- — in 2016, when I was Vice President of the United States. I said, “Let’s get it done.”

Well, today, finally, after years of failed efforts and false starts, thanks to the efforts of so many around this table, it’s done.

New energy projects linking the region, a new free trade deal and investments between neighbors, like the Saudi investments in Egypt and Jordan. The more we build these connections, the more we’ll see the benefits that return to our peoples and will grow.

Fifth, the United States will always promote human rights and the values enshrined in the U.N. Charter.

Foundational freedoms are foundational to who we are as Americans. It’s in our DNA. But it’s also because we know that fai- — that the future will be won by the countries that unleash the full potential of their populations, where women can exercise equal rights and contribute to building stronger economies, resilient societies, and more modern and capable militaries; where citizens can question and criticize their leaders without fear of reprisal.

I’ve gotten plenty of criticism over the years. It’s not fun. But the ability to speak openly and exchange ideas freely is what unlocks innovation. Accountable ins- — accountable institutions that are free from corruption, that act transparently, and respect the rule of law are the best way to deliver growth, respond to people’s needs, and, I believe, ensure justice.

And no country gets it right all the time — even most of the time — including the United States. But our people are our strength. Our countries, with the confidence to learn from their mistakes, grow stronger.

This is a table full of probi- — problem solvers. There are a lot of — there’s a lot of good we can do if we do it together.

Thank you again for inviting me to participate in this summit today, and thank you for the many years of partnership between your countries and the United States.

May God protect our troops. Thank you.