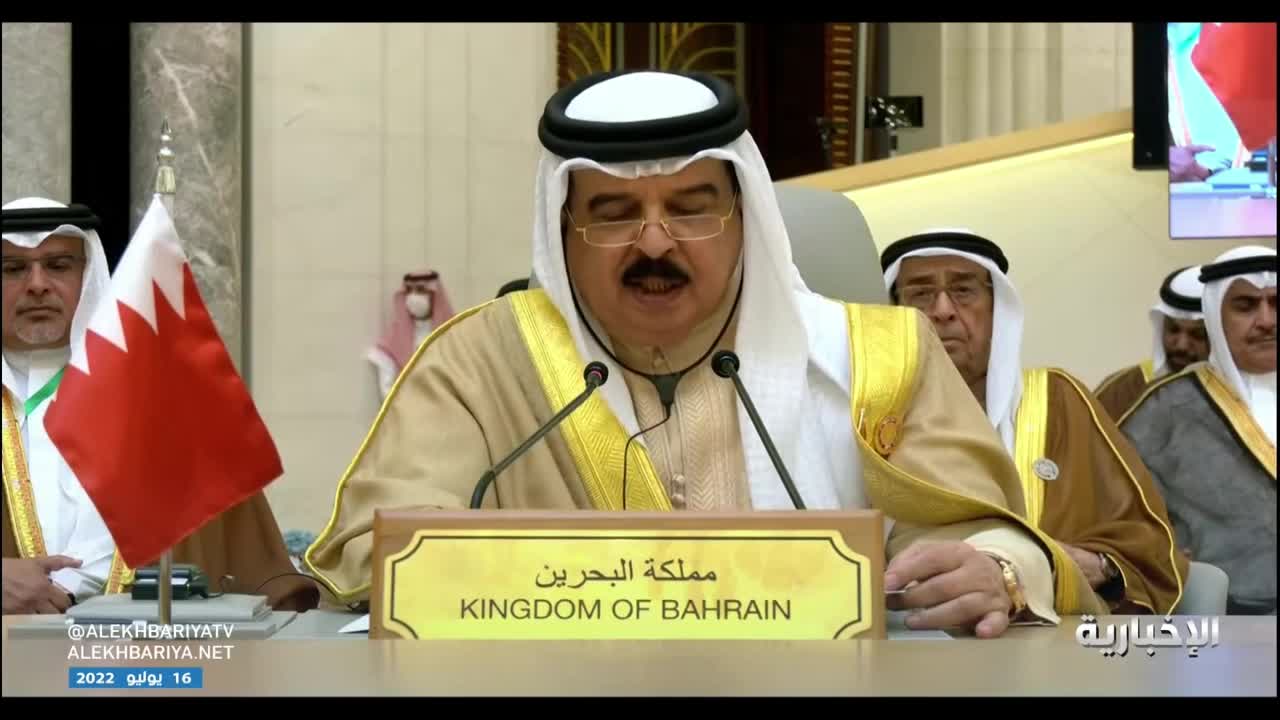 King of Bahrain Hamad bin Isa Al Khalifa stressed the need to unite efforts to stop direct interference in the internal affairs of states, saying that it is one of the most ominous current challenges which violates the principles and rights guaranteed by international laws.

In his speech at the Jeddah Security and Development Summit, the King of Bahrain also called for deep and balanced ways to resolve the crises and conflicts that have beset the Middle East, an important international strategic region that has suffered for years from difficult political, security and economic conditions and from very dangerous challenges.

“It is a great pleasure to express our heartfelt congratulations to the Custodian of the Two Holy Mosques, King Salman bin Abdulaziz Al Saud, King of the Kingdom of Saudi Arabia, on the success of this year’s Hajj, and express sincere thanks for his kind invitation to this exceptional summit, which provides an opportunity to strengthen the longstanding relations and consolidate the strategic partnership between our countries and the United States of America led by His Excellency President Joe Biden, as well as to discuss solutions to achieve peace and development for all the peoples of the Middle East by confronting the challenges that threaten regional stability, international peace and security, and global interests,” he said.

He continued “With its important international strategic position, for years the Middle East has suffered, and continues to suffer, from difficult political, security and economic conditions, and serious challenges, which require us to think carefully to find the means to overcome ongoing crises and conflicts.”

The Bahraini King added that the Palestinian cause must be resolved through a just and lasting settlement and the establishment of an independent Palestinian state, in accordance with the two-state solution and the Arab Peace Initiative, alongside the creation of promising and sustainable economic opportunities for the Palestinian people, ensuring their effective participation in comprehensive development, based on the outcomes of the “Peace to Prosperity” workshop held in the Kingdom of Bahrain in 2019.

He further stressed that there is the need to reach a political settlement to the Yemeni crisis and to continue humanitarian and developmental support for the Yemeni people.

“Direct interference in the internal affairs of countries remains among the most serious challenges that exist, as it undermines principles and rights enshrined in international law. The time has come to unify efforts to end such interference, out of respect for the sovereignty of states, their religious and cultural values, and their civilized approach to respecting others, promoting tolerance and peaceful coexistence, in addition to continuing joint efforts to make the Middle East a region free of weapons of mass destruction, and to combat terrorism and extremist ideology and its banned organizations,” King Hamad said.

He stressed that maintaining regional security and stability calls for cooperation, solidarity and effective joint action, in response to the aspirations of our people for peace, development and prosperity, affirming the importance of the ongoing work of the Combined Maritime Forces and the activation of additional Combined Task Forces in light of their pivotal role in protecting international navigation and securing oil supplies and global trade through the Strait of Hormuz and Bab al-Mandab.

“In this regard, we stress the importance of supporting efforts aimed at stabilizing global energy prices, including increasing investments to expand exploration and refining, and introducing new technologies that contribute to supporting global economic growth and addressing price inflation. We do not forget here the necessity of encouraging all initiatives to export grain, wheat and other essential items to ensure their access to world markets and initiatives that support affected countries to achieve food security,” King Hamad added.

“We hope that this summit will yield positive results and constructive outcomes that will enhance joint cooperation and consolidate relations between our countries, enabling us to confront political, security and economic challenges, establish security and stability, and lay the foundations for a strong and longstanding relationship that meets the requirements of the present and the future,” the Bahraini King concluded.

Emir of Qatar Stresses: To resolve differences in the Middle East through dialogue