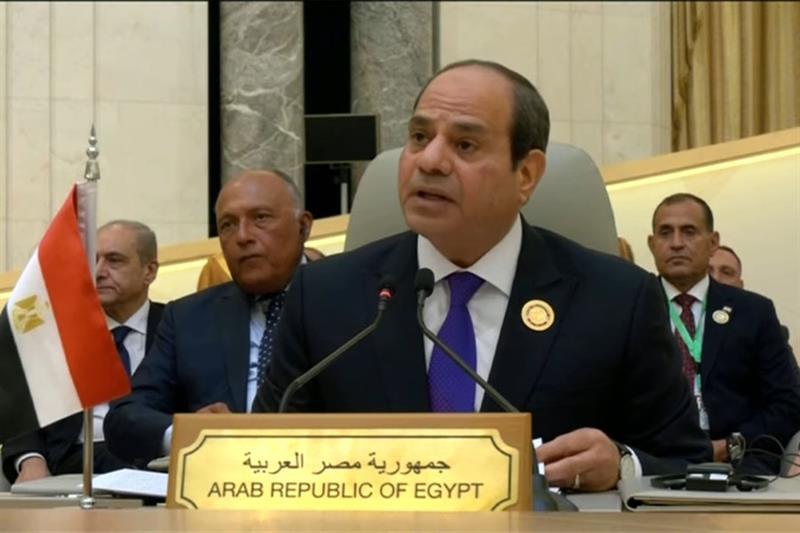 Egyptian President Abdel-Fattah El-Sisi explained on Saturday a five-axis approach on priority issues to achieve further regional stability in the near future in a speech at the Jeddah Security and Development Summit.

“I have wanted to share with you today the five axes on which Egypt’s vision to face current challenges is based to put our region on the road of sustainable and comprehensive stability,” the president said.

The first axis affirms the importance of reaching a “fair, comprehensive and ultimate” solution to the Palestinian issue on the basis of the two-state solution based on the relevant international resolutions, El-Sisi said.

“Our joint efforts to resolve the region’s crises, whether those that occurred during the past decade or those extending since before that, can only be a success by reaching a just, comprehensive and ultimate settlement of the top Arab issue,” the president said.

El-Sisi called for ensuring the establishment of an independent Palestinian state on the 4 June 1967 borders with East Jerusalem as its capital in a way that guarantees the legitimate rights of the Palestinian people to live in peace side by side with the “Israeli state”.

This should ensure security for both Palestinian and “Israeli peoples” and provide a new reality for the peoples of the region, which could be accepted, El-Sisi said.

The president added that this new reality would put an end to “exclusionary policies” and enhance the values of coexistence and peace.

Second, El-Sisi affirmed the importance of building societies on the foundations of democracy, citizenship, equality, respect for human rights, renouncement of extremist ideologies and upholding the concept of national interests.

“This is the only guarantor of sustaining stability in its comprehensive sense, protecting the peoples’ resources, and preventing them from being seized or misused,” El-Sisi said.

This requires enhancing the constitutional institutions of the states and developing their capabilities in order to lay the foundations for wise governance, achieve security, enforce law, counter outlawed forces, and provide the supportive climate for basic rights and freedoms, El-Sisi said.

This is in addition to enhancing the countries’ capabilities to empower women and youth, support the role of the civil society, and the role of religious institutions and leaders in spreading the culture of moderation and tolerance to ensure the right to freedom of belief, he added.

The president also highlighted the need for enhancing the path of political, economic and social reform, boosting investments, and securing job opportunities to achieve sustainable development.

The third axis affirms that the Arab national security is “indivisible” and that the capabilities of the Arab countries in cooperation with their partners are sufficient to provide the appropriate framework to face any threats to the Arab world, El-Sisi said.

In this regard, El-Sisi stressed that “the principles of respect for the sovereignty of states, non-interference in their internal affairs, besides fraternity and equality are the governor of the inter-Arab relations.”

He added that these values are included in the objectives of the Charter of the UN and that they must also be governing the relations internationally and between Arab states and their regional neighbors.

The fourth axis is concerned with terrorism, which remains a “main challenge from which the Arab countries have suffered from over the past decades” and which is supported by some foreign powers, El-Sisi said.

“We underscore our commitment to counter all forms and manifestations of terrorism and extremist thought with the aim of eliminating its organisations and armed militias spreading across many areas of our Arab World,” El-Sisi said.

He warned that terrorism on the Arab lands is sponsored by “some foreign powers to serve their destructive agenda … achieve political and financial gains, obstruct the implementation of national settlements and reconciliations, and prevent the enforcement of peoples’ will in some countries.”

El-Sisi warned that some of these terrorist groups have received support allowing them to execute cross-border operations.

In this regard, El-Sisi called for those providing this support to “rethink their false estimations and to unequivocally know that there would be no compromise in protecting our national security and the associated red lines.”

The president affirmed the Arab countries will protect their security, rights and interests “by all means.”

The fifth axis affirms the need for enhancing international cooperation and solidarity to boost the capabilities of the countries of the region in facing mega and emerging global crises, the president said.

International cooperation in this regard aims at containing the repercussions of those crises and ensuring the recovery from their impacts, El-Sisi said.

The president also called for boosting investments to develop infrastructure in various fields in a way that contributes to localising various industries, transferring technology and providing goods.

The president’s remarks came as the world is currently suffering from growing challenges regarding food and energy supplies in light of the Russia-Ukraine war, which started in February, casting shadow over commodity markets.

“In this regard, Egypt supports all efforts that would develop cooperation and diversify partnerships in the face of the current food and energy crises,” El-Sisi said.

Tackling the food crisis requires taking into account its multiple short and long-term dimensions to put in place urgent support that meets the needs of the countries affected by the crisis, El-Sisi noted.

He also called for developing mechanisms for sustainable agricultural production, grain storage and waste reduction in cooperation with international partners and financial institutions.

The president stressed the importance of enhancing commitment to international law on transboundary rivers in a way that allows peoples to benefit from this national resource in a fair manner.

He also called for safeguarding the requirements of water security of the states of the region and preventing upstream countries from abusing the rights of the downstream countries.

Egypt and Sudan have been negotiating with Ethiopia for almost a decade now to reach a legally binding and comprehensive agreement on filling and operating the Grand Ethiopian Renaissance Dam (GERD), which Addis Ababa started building on the Blue Nile in 2010.

Egypt, which relies mainly on the Nile for water, fears that a unilateral operation of GERD and filling its 74 billion cubic metre reservoir will negatively impact its water supply, while Sudan is concerned that GERD will harm the flow regulation to its own dams and their safety.

Ethiopia, which has unilaterally completed the first and second filling of the dam, announced that the first turbine of GERD began generating power in February.

Ethiopia has announced plans to implement the third phase of filling starting in August despite the absence of accord on regulations of filling and operation with Egypt and Sudan.

Negotiations among the three countries collapsed in April 2021 and since then, all attempts to revive them had failed.

El-Sisi affirmed the need for concerted international multilateral efforts, on top of which is the UN Framework Convention on Climate Change (UNFCCC) and the Paris Agreement, to face climate change.

The president reiterated that the Arab and African regions are among areas that will suffer the most from the impacts of climate change, including on food, water and energy security, communal peace and political stability.

In this regard, he called for formulating a comprehensive vision to back Arab and African countries, enable them to fulfill their international commitments on climate, and raise their capacities of adaptation to the effects of climate change.

He added that this vision should contribute to “intensifying climate financing directed to these countries, as well as supporting and promoting investments in renewable energy.”

“In this regard, I look forward to receiving you in Sharm El-Sheikh city in the international climate conference COP27 in November 2022,” El-Sisi said.

“This is in order to continue reaffirming our firm commitment toward efforts facing climate change, transform this challenge into a real opportunity for development, and move to more sustainable green economic patterns for the benefit of all the peoples of the earth,” he added.