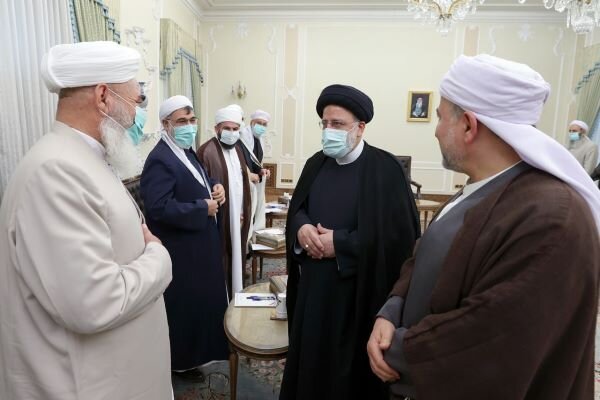 Iranian President Ebrahim Raisi stressed that unity among Shias and Sunnis is considered as a strategy, not a tactic, from the standpoint of the Islamic Republic of Iran.

In a meeting with a number of Sunni scholars, Raisi said on Sunday that clerics and scholars enjoy significant position in Iran’s history.

“You Sunni clerics and thinkers have provided many services in their own country,” the president said, adding, “Shiites and Sunnis have lived together in Islamic Iran for many years.”

Pointing to the demands made by certain Sunni scholars to increase utilization of their services in management, the chief executive stated that using qualified figures is necessary and important and that the administration gives importance to efficiency, so the administration underlines the need for using local manpower in any province.

As to the spread of Takfiri movements in the West Asia region, the president warned that we must be careful about the influence of Takfiri and Salafi ideas in the country; British Shiism and American Sunnism are two sides of the same coin, and both are anti-unity in the Islamic world, while unity is a strategy for the Islamic Republic of Iran, not a tactic.

Elsewhere in his remarks, President Raisi referred to Iranian people’s concerns on livelihood, noting that the incumbent administration pays special heed to people’s concerns, which are being conveyed to clerics and scholars, and that statesmen will make all-out efforts to remove such problems.

In the beginning of the administration, the statesmen were facing different challenges such as budget deficit, mounting monthly debts, demise of about 700 people per day because of COVID-19, and corruption created by official subsidized exchange rate at 42,000 rial to one US dollar, he argued.

So the administration has reached the conclusion that the money should be given to consumers instead of importers, Raisi emphasized.