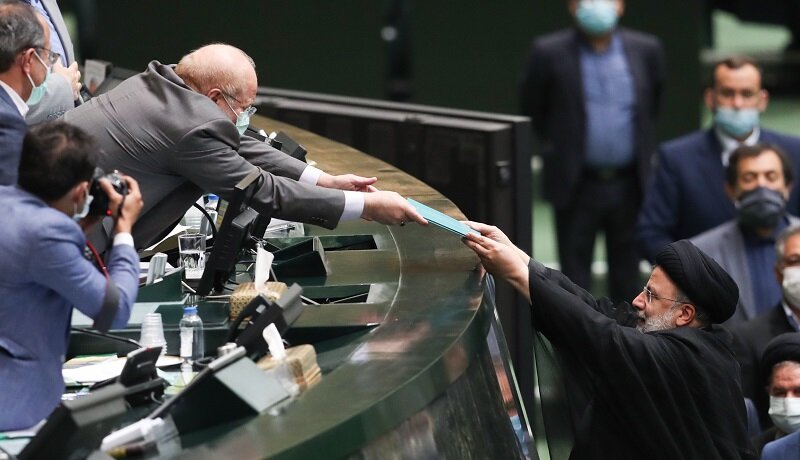 Iranian President submitted his administration’s proposed budget bill for the next Iranian fiscal year 1401 (which will begin in March 2022) to the Parliament on Sunday.

There has been a week delay in submitting the budget bill. According to the internal regulations of the Iranian parliament, the administration should present the annual budget bill by December 5 each year.

The budget bill is submitted by President Raisi to the legislature for review and approval or amendment if needed.

Once the parliamentarians endorse the government’s proposed budget bill, it will go to the Guardian Council, the constitutional supervisory body, for ratification before becoming law.

While submitting the 1401 budget bill to the parliament, Raisi referred to the country’s problems and said, “We need a jihadist plan and work to solve people’s problems.”

The President added, “In the years after the victory of the Islamic Revolution, thanks to the efforts of this land’s men and women, a lot of work has been done for development in water, electricity, higher education, agriculture, industry and mining, but with all these measures, serious problems in economic, social and cultural fields still exist.”

The President continued “The serious problem that everyone used to suffer from was that the economy was tied to the will of outsiders, and therefore, despite the many capacities that exist in the country, especially the human resources and valuable reserves, we had serious economic problems.”

Raisi pointed out that inequality in investment attraction relative to depreciation, economic growth of 4 tenths of a percent, and a 10-fold increase in costs, makes the people and representatives concerned about the problems, stating “The first goal in the 1401 budget is economic stability. The economy must benefit from stability so that it can be reassuring for producers, consumers and the market.”

Raisi added “The requirement for economic stability is to provide a budget that has no deficit. If there is a budget deficit, it will be the root of many problems in the country.”

He went on to say “In the 1401 budget, borrowing from the Central Bank and increasing the monetary base is a red line. The plan is to prevent this from happening because it will create serious problems for the country’s economy.”

Emphasizing that this process will continue until inflation reaches single digits, the President stated “We hope that inflation, which is now in double digits and has worried the people and economic activists and everyone, will become a minimal and declining inflation.”