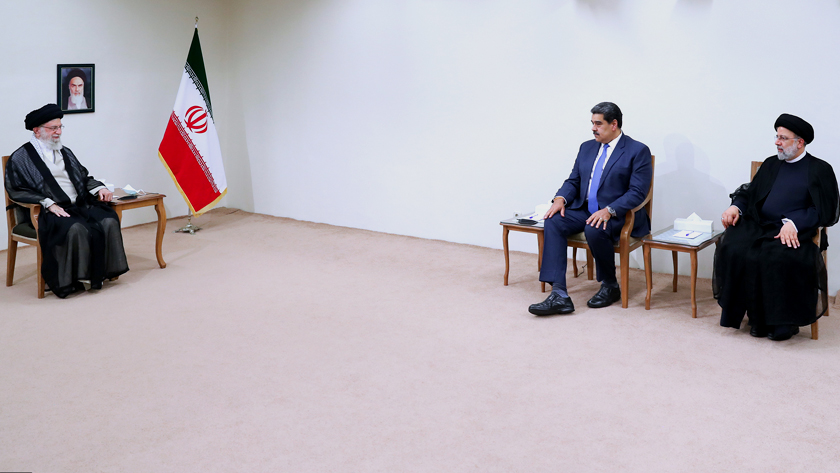 Leader of the Islamic Revolution Ayatollah Ali Khamenei hailed the successful experience of Iran and Venezuela in countering US pressures.

In remarks in a meeting with the visiting Venezuelan President Nicolas Maduro in Tehran on Saturday evening, Ayatollah Khamenei pointed to the US enormous pressure campaigns and hybrid warfare against both Iran and Venezuela and noted, “The successful experience of the two countries showed that resistance is the only way to counter such pressures.”

Ayatollah Khamenei praised the victory of the Venezuelan government and nation in a tough struggle against the US and a hybrid and all-out war it has waged against Caracas and stated, “Your resistance and that of the people of Venezuela is very valuable because it enhances the value, status and merits of a nation and a country as well as its leaders.”

“Today, the US views Venezuela in a different (manner) compared to the past,” the Leader said.

Praising the progress Iran has made in science and technology in the face of US sanctions, Ayatollah Khamenei said “such major steps have been taken under the circumstances that the heaviest and most unprecedented sanctions and pressures have been imposed on the Iranian nation, and the Americans themselves called it the ‘maximum pressure’ (policy).”

The Leader welcomed a 20-year partnership agreement signed between Tehran and Caracas aimed at bolstering bilateral cooperation in various fields, and emphasized that the Iranian and Venezuelan governments must further strengthen their relationship.

In order to have long-term cooperation, it is necessary to pursue and implement agreements, Ayatollah Khamenei pointed out.

Referring to cordial ties between Iran and Venezuela, the Leader stated, “The two countries do not have such close relations with any (other) country, and the Islamic Republic of Iran has shown that it takes risks in times of danger and offers a helping hand to its friends.”

During the meeting, which was also attended by Iranian President Ebrahim Raisi, the Venezuelan president thanked Iran’s support for the people of his country in their hard battle against the US pressures.

He pointed to the dire economic situation that Venezuela has been facing in recent years, and said the US has started a gradual war of attrition and multi-dimension warfare against Caracas.

However, Venezuela has succeeded in fully confronting the US aggression through resistance and making use of the opportunities developed as a result of sanctions against the country, Maduro said, adding that the South American country is now facing better conditions in comparison with previous years.

He also noted that Venezuela is drawing up a precise roadmap for improving cooperation with Iran in various fields, particularly science and technology.

Elsewhere in his remarks, the Venezuelan president voiced support for Palestinians and said that’s why the Zionist regime has been constantly hatching plots against Caracas through the Israeli spy agency Mossad.