Sayed Nasrallah Says Ballots of Resistance People a message to those plotting against Resistance, its weapons 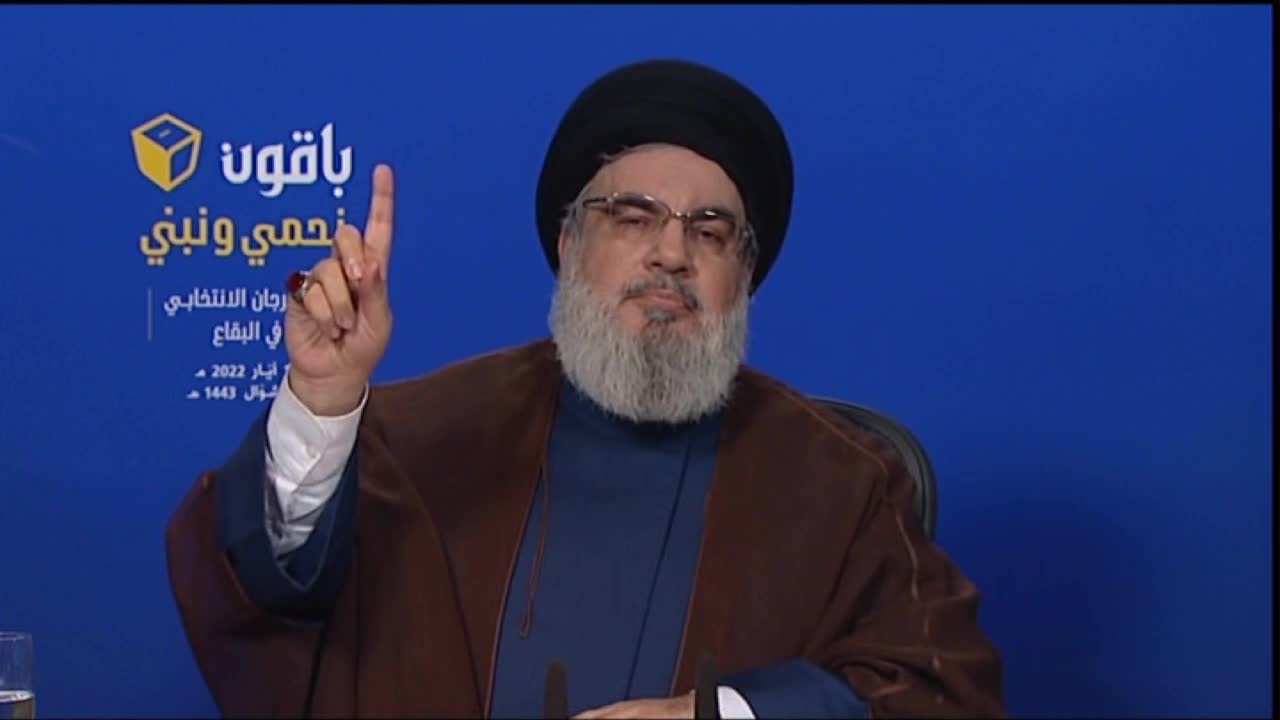 Hezbollah Secretary General Sayed Hasan Nasrallah told the people of Resistance that their “ballots on May 15 is a message to all those who have been plotting against the Resistance and its weapons”.

Speaking on Friday during electoral ceremonies in the Beqaa, Sayed Nasrallah told those who said they want to ‘break his finger’, “This finger represents your fingers which are on the trigger and represents your choices that reject humiliation.”

“My finger is safe when yours are marked with ink on the election day on May 15,” Sayed Nasrallah stressed.

He affirmed that Hezbollah’s weapon has not prevented anyone to implement electricity plan, noting that the US has been preventing investments, covering theft and starving Lebanese people.

“Rivals in Lebanon are raising stupid topics in their electoral campaigns to confront Hezbollah,” the Secretary General said.

He hailed their wide participation in Hezbollah electoral ceremonies, adding “Unlike plotters, I am not surprised by the high participation”.

Hezbollah Chief told those who call to disarm Resistance” If it had not been for Hezbollah’s weapon Beqaa would have fallen into terrorists’ hands.”

“Lebanese Army was prevented by a political decision to confront Takfiri terrorists in Beqaa barrens,” Sayed Nasrallah said, adding “If Takfiri groups had obtained victory in Syria, Beqaa region would have been in real danger.”

“We have to recall those who stand by the Resistance, on top of which are Syria and the Islamic Republic of Iran,” he underlined.

The Secretary General further affirmed that enemies want Beqaa residents to abandon the Resistance and its weapons.

He also offered condolences for families of martyrs who fell in the terrorist attack in Syria’s Aleppo countryside.

In similar context and at the forefront of his speech, Sayed Nasrallah denounced Israeli crime which killed Palestinian journalist Shireen Abu Akleh in Jenin.

He pointed out that Shireen Abu Akleh had been for years a witness for Israeli crimes against Palestinian people.

“The Israeli enemy doesn’t distinguish between a Muslim and a Christian in Palestine,” Sayed Nasrallah underlined.

He went on to say “The powerful message behind Shireen Abu Akleh’s martyrdom is that she is a Christian.”

The first to be ashamed by this crime are all those who call for normalization of ties with Zionist entity, Sayed Nasrallah said.