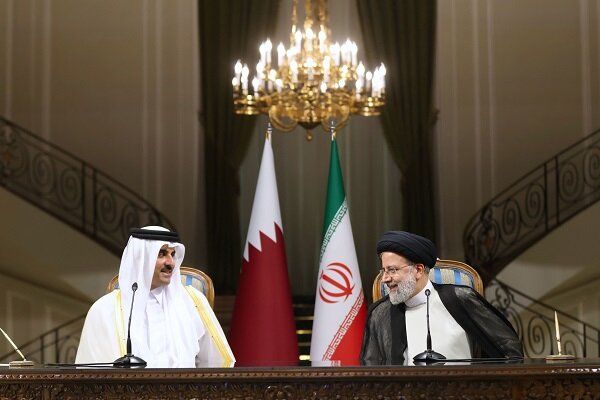 Iran’s President Ebrahim Raisi said in a joint press conference with Emir of Qatar on Thursday that any foreign intervention would be detrimental to the regional security.

Raisi said that he and the Qatari Emir had emphasized joint investments and expansion of ties during the meeting.

The Iranian President warned the countries in the region any intervention by foreign and Western sides not only fails to provide security, but also will be detrimental to the regional security and only the regional governments can solve the problems in the region.

He said that Iran and Qatar highlighted the necessity of ending the blockade of Yemen and the Yemeni people’s right to determining their own fate.

Formation of an all-inclusive government in Afghanistan, liberation of Holy Quds from the Israeli regime’s occupation, and putting an end to blockade of Gaza and the tragic crimes committed by the Zionist Regime were also highlighted by the two leaders, according to Raisi.

The Iranian President also expressed sympathy towards the Qatari Emir and the family of Al Jazeera reporter Shrieen Abu Akleh who was assassinated by the Zionist Regime yesterday, saying that such crimes couldn’t provide the Zionist Regime with security, but would increase public hate for the regime’s crimes.

The Qatari Emir, for his part, reaffirmed constructive dialogue as the only way out of disagreements in West Asia and said that the main topic in his meeting with Raisi was the issue of Palestine, but they have also discussed Syria, Iraq and Yemen.

He said that Doha had a positive approach towards the talks in Vienna to remove sanctions against Iran and believed that the issues would be solved through dialogue.

Sheikh Tamim expressed sympathy towards the martyred reporter’s family and demanded punishment for the perpetrators and called on the global community avoid double-standards in addressing this incident.

He thanked Iran’s President and other officials for their assistance in successfully holding the 2022 World Cup, and said that Qatar will welcome Iranian football fans who wish to travel to Qatar to attend the event.