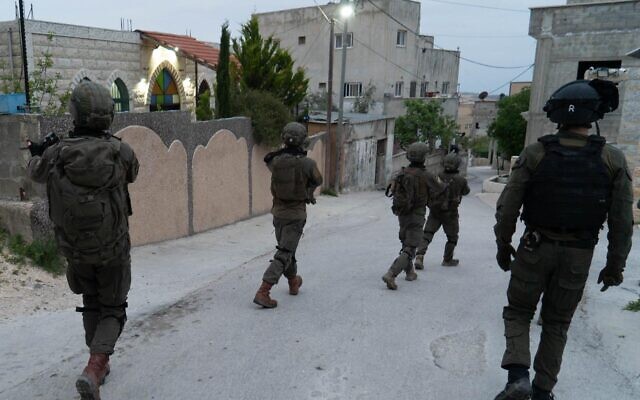 A Palestinian boy was shot dead by Israeli forces in Husan town, west of Bethlehem, for allegedly throwing a Molotov cocktail.

Israeli military also stormed on Wednesday Silwad, east of Ramallah, and surrounded a house, resulting in violent confrontations in the town. In the aftermath, Israelis detained dozens of Palestinians. Israeli security services said that among the detained were members of a cell that planned to carry out attacks against Israeli targets.

According to police, Israeli troops surrounded a building in the town of Silwad, northeast of Ramallah, where three suspects were holed up.

Soldiers also arrested a Palestinian in the nearby town of Kobar. The four detained were taken for Shin Bet questioning.

Israeli media also reported that clashes erupted during the raid in Silwad, with Palestinian health officials reporting a man was shot and killed by Israeli troops. The Palestinian Authority Health Ministry identified him as 20-year-old Omar Alayan.

It added that the Shin Bet named one of the suspects arrested in Silwad as Maad Hamed, a Hamas operative accused of shooting Israeli Malachy Rosenfeld in a 2015 attack near Ramallah.

The Shin Bet said Hamed had been in Palestinian Authority custody since the attack, but recently escaped.

A statement from the security service said the suspected reason for his escape “was to advance a terror attack against Israeli targets in the immediate future.” It added that the other suspects in Silwad were planning “terror activities” together with Hamed, but did not further elaborate.

Separately, Channel 13 news reported that a Palestinian man arrested Wednesday morning in Tulkarm was planning a “terrorist attack” during Passover.

The suspect initially fled when officers tried to detain him, before being shot and taken into custody.