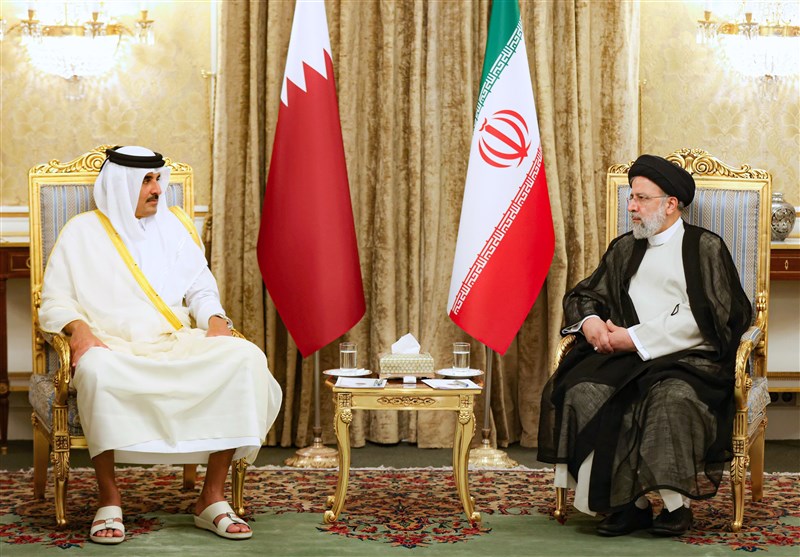 Raisi said in a joint press conference with the visiting emir of Qatar in Tehran on Thursday that the two sides in their meeting earlier in the day stresed the expansion of relations in all sectors, including politics, economy, trade, culture, tourism, and energy.

Joint investment between Tehran and Doha and the implementation of mutual agreements reached during Raisi’s recent visit to Qatar were other highlights of his discussions with the Emir of Qatar.

In another part of his remarks at the presser, Iran’s president negated all forms of foreign presence in the West Asia region, especially by Western countries.

“Such presence does not bring security to the region, but on the contrary, undermines it,” he said.

The two leaders, Raisi said, also laid emphasis on the need for the liberation of the occupied al-Quds, an end to the brutal siege of Gaza, and termination of Israel’s crimes against Palestinians.

“During our talks, we discussed major regional issues, especially the issue of Yemen,” Iran’s president said, adding, “We stressed that the blockade of Yemen must end and Yemenis must be allowed to decide the fate of their country.”

Raisi added that another highlight of his talks with the Emir of Qatar was the situation in Afghanistan, noting that the country must have an inclusive government representing all groups and political factions, so that sustainable security could be established there.

Iran’s chief executive also touched on the killing of the Palestinian journalist by the Israeli forces while covering the latest attacks by those forces on Palestinians, expressing his condolences on her martyrdom.

“Such crimes do not bring security to the Zionist regime, but increase public hatred toward the regime,” Iran’s president said.

Referring to Israeli crimes, Raisi said “Such crimes will not continue for long”.

The Emir of Qatar, for his part, said the two leaders discussed major bilateral issues and all-out expansion of cooperation in all fields during their discussions.

Al Thani said the two sides agreed that resolution of the current problems facing the region is only possible through dialogue and negotiations.

“The existing problems in the region must be settled through constructive dialogue,” he said, adding that the two sides also discussed the ongoing situation in Palestine, Syria, Yemen and Iraq.