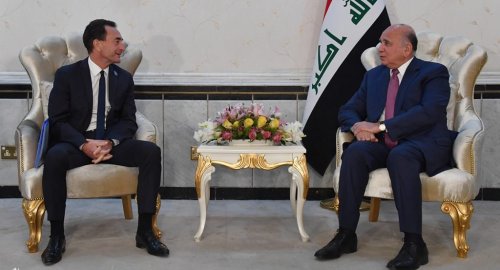 Iraq’s Foreign Minister Fouad Hussein confirmed on Thursday that the government has taken effective steps to return those wishing from Belarus, pointing to the possibility of opening a flight from Baghdad or Erbil to Beirut and then to Minsk.

Hussein received, at the ministry’s building in Baghdad, the French Ambassador to Iraq Eric Chevalier, where they discussed bilateral relations between the two countries and ways to enhance prospects for cooperation.

“In all fields and in a manner that serves the mutual interests of the two peoples, the two countries and the whole region, as well as developing economic and trade cooperation and joint action in facing the challenges of terrorism, combating corruption and recovering money, protecting the environment and confronting climate change.”

He added that “developments in the region of common interest were discussed,” noting that “the importance of easing tensions and relying on dialogue in resolving outstanding issues in order to establish peace in the region related to the security and stability of Iraq and the return of its pivotal role was emphasized.”

Regarding the file of Iraqi migrants stranded on the Belarusian and Polish borders, the minister confirmed that “the Iraqi government has taken effective steps to return citizens wishing to return to Iraq,” noting that “there is a possibility to open a flight from Baghdad or Erbil to Beirut and then to Minsk”.