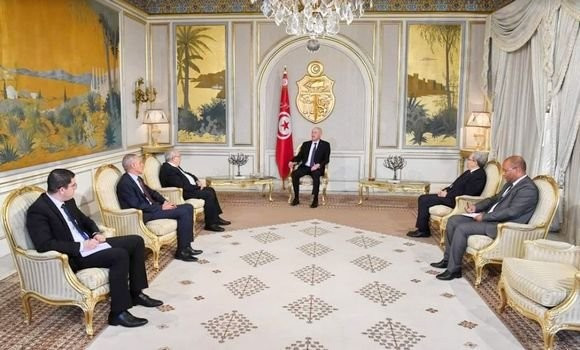 Saied recalled the milestones linking the two countries, stressing the solid and deep ties of brotherhood and unity of destiny between the two brotherly peoples based on the principles of solidarity, mutual aid and altruism.

The President called for an acceleration of bilateral meetings, including first and foremost the Joint High Commission.

For his part, Lamamra stressed that his visit to Tunisia is to boost the solid relations between Tunisia and Algeria which are “at a good level”.

He added that the visit also aimes to respond to the “concern of tripartite consultation between Tunisia, Algeria and Libya on the situation in Libya as well as the various issues concerning these three countries”.

The Algerian FM said he had delivered a message from President of the Republic, Abdelmadjid Tebboune.

He added that this meeting was an opportunity to exchange views on the agreements concluded between the two countries and the two presidents since the state visit of the Algerian president to Tunisia last December.

The top Algerian diplomat said that the two countries are currently working on “implementing what has been previously agreed” and “opening new horizons to this relationship”, adding that the Tunisian-Algerian High Joint Commission will be held soon.