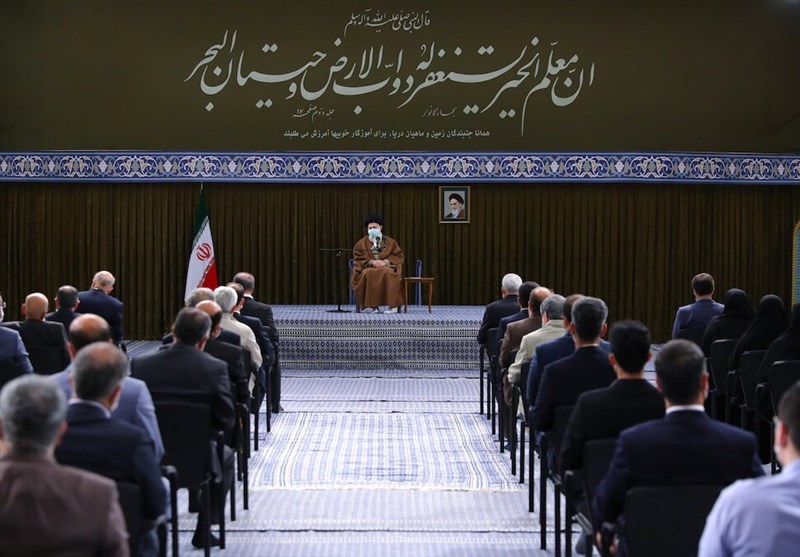 Stressing the important role that Iranian teachers play in developing a modern Islamic civilization, Leader of the Islamic Revolution Ayatollah Sayed Ali Khamenei said the current generation of students should remain vigilant against the obsolete Eastern and Western civilizations.

A group of Iranian teachers and education officials from across the country met with Ayatollah Khamenei at the Imam Khomeini Hussainiyah of Tehran on Wednesday morning.

Praising teachers and the Education Ministry’s personnel for training a “civilization-creating generation” and lauding their efforts under the coronavirus pandemic, the Leader stressed that the younger generation should focus on their national and Islamic-Iranian identity, develop self-confidence and resistance, improve their knowledge of Imam Khomeini and his aspirations, and try to raise scientific skills.

Ayatollah Khamenei also pointed to the sublime goal of building a modern and prosperous Islamic civilization, adding, “The human resources account for the infrastructure of every civilization, and the founders of the modern Islamic civilization are the generation now at the teachers’ disposal. Therefore, the importance and value of teaching should be comprehended from this angle.”

“This generation (of Iranian students) with such tremendous goal must own Iranian-Islamic identity, firm and deep beliefs, and self-confidence, be self-made, vigilant in the face of the obsolete civilizations of East and West, scientist, and efficient in order to be able to shape that great civilization,” he stated.

“In a world where everybody, either the East or the West, is bullying, the future generation must learn the value and importance of resistance from now so that they would create civilization in light of these teachings and make the nation and the country dignified,” Ayatollah Khamenei added.

The Leader also stressed the need to familiarize the students with the Islamic lifestyle, social cooperation, research, voluntary activities, battling the social harms, and law obedience.

Ayatollah Khamenei also called for efforts to carry out the document on fundamental reform of education in a full and integrated manner.

More than a decade ago, the Leader outlined the plan for fundamental reform of the educational system in Iran.