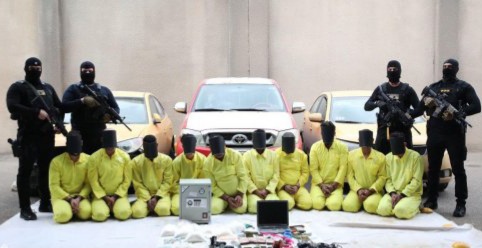 The spokesman for the commander-in-chief of the armed forces, Yahya Rasool, announced Tuesday the dismantling of a network of major drug traffickers and dealers in possession of large quantities of crystal in the capital Baghdad.

“In accordance with the directives of the Commander-in-Chief of the Armed Forces Mustafa al-Kadhimi, based on national responsibility and the tasks assigned to the National Intelligence Service, and after the availability of accurate intelligence and a well-prepared plan, the agency, in cooperation with the First Karkh Investigation Court, carried out a qualitative operation in which they were able to dismantle a criminal network of major drug traffickers and promoters in Baghdad with large quantities of crystal,” Rasool said in a statement.

“While this operation confirms the ability of Iraqi security and intelligence agencies to track down criminal and subversive gangs, we promise our people that the agency will remain a safety zone for Iraqi national security,” the statement said.

Rasoul called on citizens to “continue to cooperate with the security services to deal with such crimes aimed at destabilizing security and stability and destroying Iraq’s social structure.”