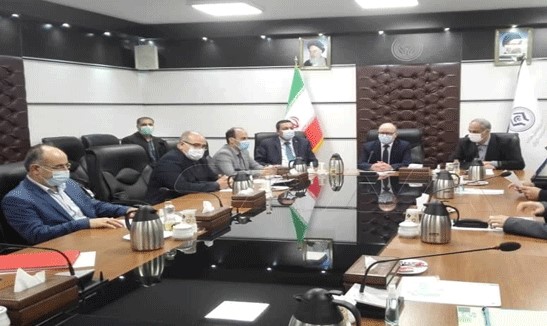 Syrian Minister of Higher Education and Scientific Research underlined the importance of enhancing cooperation between the Syrian and Iranian Universities in the domains of research, production, scientific and knowledge projects and linking them to developmental, industrial and productive projects in both countries.

Bassam Ibrahim’s remarks came during a meeting in Tehran with President of Tehran University, Sayed Mohammad Moghimi, and the deans of the university’s faculties, in the presence of the accompanying delegation to Ibrahim and Syria’s Ambassador to Iran Shafiq Dayoub.

Ibrahim underlined the importance of benefiting from the modern technology, specifically the nanotechnology through setting programs, work plans and executive mechanisms between Syrian and Iranian universities and the research centers in both countries to keep up with the requirements of scientific progress.

“The exchange of experience, joint research, students and professors, and twinning universities, establishing technological and scientific parks, as well supervising postgraduate research, all of that would contribute to enhancing scientific cooperation in a way that would serve the progress in the two countries,” Ibrahim said.

For his part, Dayoub highlighted the importance of localizing modern technology in Syria, through the promotion and development of scientific and research cooperation between Syrian and Iranian universities.

A number of faculties’ deans at Tehran University affirmed readiness for cooperating with Syrian universities in the specializations needed by the Syrian side.

Tehran and Damascus universities signed an understanding Memorandum which guarantees the initial foundations for all subsequent agreements between the two parties in the field of academic specializations.

During his meeting with President of Iranian Research Organization for Science and Technology. Prof. Ali Alireza Ashouri, Rector of Damascus University has underlined the importance of benefiting from the organization’s capabilities.

Ashouri, for his part, affirmed the organization’s readiness to cooperate with Syrian universities and scientific research centers and to work on implementing joint research projects to benefit from modern technology and to upgrade the performance of specialized human cadres.

Ibrahim noted that there are many fields of cooperation between Syrian universities and research centers and the Iranian organization.

Ibrahim also met a number of Syrian students who are studying at the Iranian universities at the headquarters of the Syrian embassy in Tehran, and he was briefed on the problems facing the process of their educational attainment.

In turn, the Syrian Ambassador in Tehran shed light on the students’ key role in the reconstruction and development process in Syria.