Al-Kadhimi: Full force stand against those who threaten Iraq security 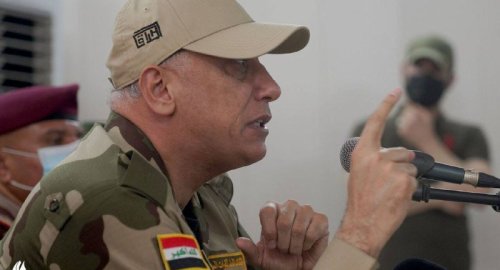 “In the morning we were in Makhmour, and we sent a clear message to the terrorist groups that they are unable to play with Iraq’s security,” Al-Kadhimi said during his visit to Basra Operations Command and his meeting with security leaders.

He added “Just as we brought down the leaders of terrorism one by one, and struck its cells in the most remote deserts and mountains, we will be on the lookout for them at any point in our beloved Iraq.”

“From here, I tell you that Iraqi blood is one, and terrorism is one, even if it has many names and masks, Iraqi blood is precious to us, and there is no difference in it regardless of its national or religious affiliation, and we will stand with full force before those who threaten Iraq’s security and dare to intimidate Iraqis, and hide under any cover was.”

He continued “There is Daesh that seeks to terrorize the citizen, and there are those who seek to terrorize the state, and both are one enemy, as terrorism wants to dissuade the state from its duties, and preoccupies it with chaotic events, in order to harvest cheap interests.”

“The murder of our officers in the security services is treachery, and the murder of our best youth in cold blood is a series of crimes known to all. We will not be dragged into confrontation, but we will drag them to justice by law, and just retribution awaits them,” Al-Kadhimi underlined.

The Prime Minister went on to say pointed out that “just as we arrested the killers of Hisham Al-Hashemi, Ahmed Abdel-Samad, and his colleague Safaa, we will bring the criminals one by one, and they will stand before the just judiciary, and before the people to expose their crimes”.

Al-Kadhimi warned “It is very important for those who think themselves that they are above the state and the law, and the logic of force will certainly backfire on its owners, and I say to the criminals of terrorism and chaos, know well that there is no local, regional, legal, or religious cover for you, you criminals.”

He concluded saying, “We are continuing to arrest Daesh terrorists, as well as the death squad terrorists, in retaliation for the blood of our martyrs.”