President Saied Says He Has Not Forbidden Anyone to Meet 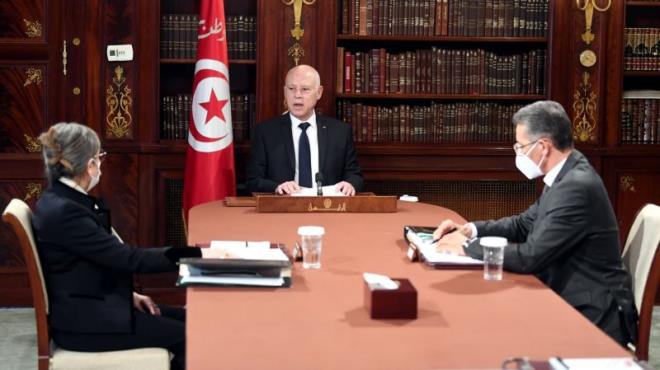 Tunisian President Kais Saied, on Monday, said he “did not forbid anyone to meet” in reference to the press conference held Monday morning outside a private hall in Bab Saadoun, Tunis, where it was initially scheduled to announce the launch of the initiative “Citizens against Coup”.

The owner of the private hall “refused to open the doors to the participants for lack of authorisation,” said member of the initiative Habib Bouajila.

He blamed the President of the Republic, saying this “violates the freedom to express refusal of the July 25 coup.”

Saied later in the afternoon said “How could I forbid them to meet when I only heard about it once the meeting was over,” adding “what weight do they have in society for me to forbid them (to meet)?”

“The exceptional measures have nothing to do with a coup,” he pointed out, recalling that Chapters 1 and 2 of the Constitution have not been suspended.These parties changed their position “as soon as they knew they had no place in the government, falsely qualifying July 25 as a coup”.

Saied was speaking during a meeting with Prime Minister Najla Bouden and Interior Minister Taoufik Charfeddine on Monday afternoon.

The meeting tackled the environmental situation in the country, particularly in Sfax.

In a video posted by Presidency of the Republic, Saied recalled that in proposing the amendment of the law relating to the High Judicial Council, he had insisted on the need “to involve honest judges, who are numerous.”

The aim is to get out of the catastrophic situation caused by laws and texts designed to serve the interests of certain parties with a view to undermining the Tunisian state, the President stressed.