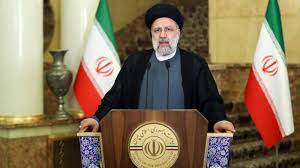 Iranian President Ebrahim Raisi said that the Islamic Republic’s nuclear technology is “irreversible”, noting that research in the field will not be tied with other’s requests.

“Relying on Iranian young people and scientists is a model that always works and should be used in other areas as well,” Raisi said.

On the National Day of Nuclear Technology, the Iranian President visited the exhibition of the National Atomic Energy Organization to see the new achievements of Iranian scientists in the field of peaceful nuclear activities.

Emphasizing the right to use peaceful nuclear energy, Raisi called Iran’s nuclear knowledge and technology in the nuclear field irreversible.

He also hailed the progress of Iranian young scientists in the field of nuclear technology and described these developments as a symbol of self-confidence and reliance on internal power, and called for this spirit to spread to other industries and strategic areas in the country.

Raisi stated that Iran would continue research in peaceful nuclear fields regardless of the opinion or requests of others, saying, “Fortunately, the research work of scientists in the peaceful uses of nuclear energy is accelerating well and the government will support this process.”

Top Iranian Negotiator: Serious will of US to reach an agreement to be verified in upcoming negotiations