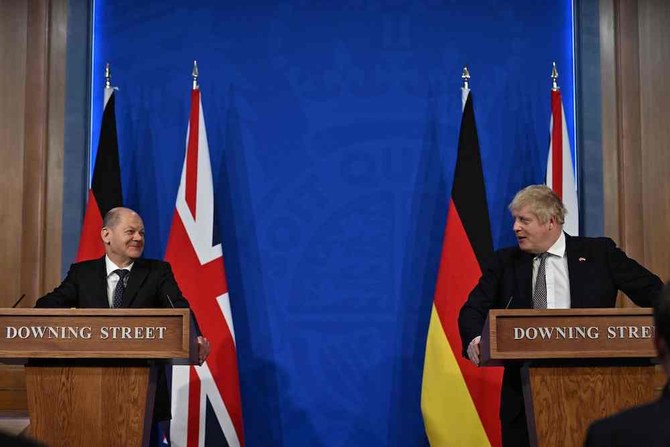 The attack at Kramatorsk “shows the depths to which (Vladimir) Putin’s once-vaunted army has sunk,” he told reporters alongside German Chancellor Olaf Scholz.

Johnson said Britain and Germany would work together on renewable technologies.
“We cannot transform our energy systems overnight, but we also know that Putin’s war will not end overnight,” the prime minister said.

Asked whether he also intended to visit Kyiv, Johnson said “we are trying to help people come from Ukraine,” pointing to German and British efforts to shelter refugees fleeing the war.

Scholz also defended Germany against criticism that it is dragging its feet on ending Russian energy imports as part of Western sanctions over Putin’s invasion of Ukraine. “We are doing all we can and we are doing a lot,” the chancellor said, pointing to Germany’s long-term diversification to alternative energy and other suppliers for natural gas.

“This is, as you may imagine, not that easy because it needs infrastructure that has to be built first. So pipelines to the northern shore of Germany, regasification ports that make it possible for example that LNG ships could give their supply to the gas grid in Germany.”