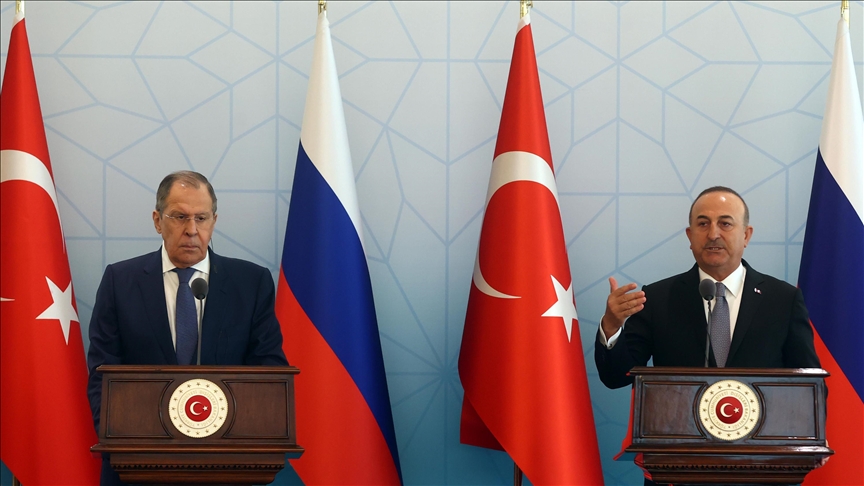 The two top diplomats held talks on grain exports from Ukraine, the prospects of resuming negotiations between Russia and Ukraine as well as Turkey’s plans to launch a new military operation in northern Syria.

Turkey’s Foreign minister said that there may again be grounds for talks between Russia and Ukraine as the Russian-Ukrainen war continues past the 100-day mark.

“We see a will between Russia and Ukraine to return to negotiations,” Cavusoglu said during a joint news conference with his Russian counterpart Sergey Lavrov at the Presidential Complex in Ankara.

Saying that the two officials had a “fruitful” meeting, Cavusoglu underlined that Ankara sees UN plans to establish a mechanism on a food corridor out of Ukraine, colloquially referred to as a global breadbasket, as “reasonable and feasible”.

The Turkish foreign minister further called Russia’s demands on the removal of sanctions to help with grain exports as “legitimate”.

Stressing that the world is facing a real food crisis and problems with fertilizer, Cavusoglu noted the concerns of Latin American countries on this issue, as well.

He also urged all parties to jointly pave the way for the export of products from both Ukraine and Russia.

For his part, Lavrov pointed out that the share of Ukrainian grain exports in the global market made up about 1% of the total and do not play a significant role in thwarting the risk of a global food crisis.

The Russian and Turkish militaries are discussing issues of clearing mines dotting Ukraine’s ports to free the way for grain exports, Lavrov said.

According to the minister, the main problem with the export of Ukraine’s grains is the country’s President Volodymyr Zelensky’s refusal to discuss the clearing of sea mines.

He expressed a readiness to provide any kind of security for ships, leaving Ukraine’s ports with grain “hand-in-hand” with Turkish counterparts.

“We guarantee that we will not use the demining of Ukrainian ports to attack the country,” he said.

He then urged the resumption of peace talks between Moscow and Kyiv and expressed a readiness for a meeting with the UN and Ukraine in Istanbul.