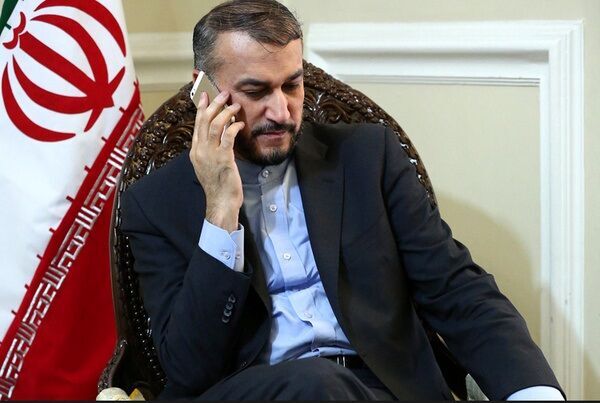 Iranian foreign Minister Hossein Amirabdollahian told UN chief Antonio Guterres that the US is to blame the current situation in Vienna talks over its so-called maximum pressure campaign.

During a phone conversation, Amirabdollahian and Guterres discussed some regional and international developments including the situation in Yemen, Afghanistan and Ukraine as well as the sanctions removal talks.

The top Iranian diplomat referred to the temporary ceasefire in Yemen and said the continuation of the truce is necessary but called for the fulfillment of obligations over the ceasefire agreement and the removal of the humanitarian siege of Yemen.

Amirabdollahian called the security and humanitarian situation in Afghanistan very worrying and underlined the need for the formation of an inclusive government there with the participation of all ethnic groups, Mehr news agency reported.

Amirabdollahian further spoke about the surge in terrorist attacks in Afghanistan and also the problems that stem from poverty in the country. He then underscored the necessity of releasing frozen Afghan assets.

While pointing to logical expectations from the UN, the top Iranian diplomat thanked the world body’s chief for his efforts to establish peace and security.

The Iranian FM also reaffirmed Iran’s opposition to the war in Ukraine and referred to Tehran’s political efforts to stay away from war and focus on a political solution and attention to the humanitarian aspects of the Ukraine crisis. He said the Ukraine crisis must not prevent the attention of the international community to the humanitarian catastrophe in Afghanistan.

Amirabdollahian also criticized the recent non-binding bill approved by the US Congress and said reaching a lasting, robust and fair agreement calls for adopting a realistic and brave decision by the US government to redress its past mistakes.

During the conversation, the UN chief also thanked and welcomed Iran for its constructive efforts and stance to support the Yemen truce.

Guterres expressed hope that with the removal of all obstacles, “we will witness the resumption of flights from the Sana’a Airport and the reestablishment of link between Yemeni provinces and also the continuation of the ceasefire.”

The UN secretary-general welcomed the continuation of talks and movement toward the normalization of diplomatic ties between Tehran and Riyadh.

The UN chief underlined the significance of the formation of an inclusive government in Afghanistan and also appreciated the constructive role of the Islamic Republic of Iran in accepting Afghan refugees and providing them with humanitarian aid and also hosting the displaced Afghans.