Envoy: Venezuela ready to offer military help to Russia if relations with US exacerbate 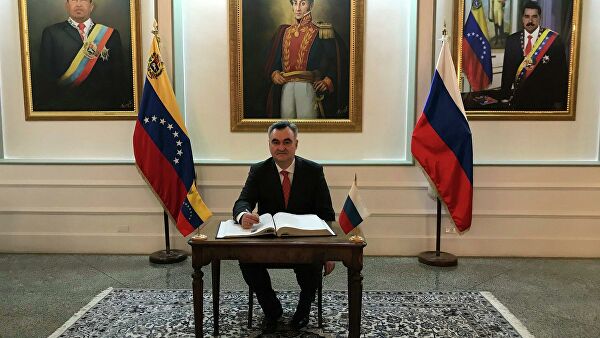 Asked whether Caracas would be capable of providing military and technical assistance to Moscow if Russian-US relations exacerbate sharply on the YouTube channel Soloviev.Live on Saturday, he said “Absolutely”.

He added “From the very first minutes of the hysteria, which was sparked by the words of Russian Deputy Foreign Minister Sergey Alexeyevich Ryabkov [about the potential deployment of Russian military infrastructure to Venezuela or Cuba], in the West and the United States, I have been receiving calls from Venezuelan politicians and cabinet members.”

“I have held meetings with them, and they pledged their unequivocal and, in general, unhesitating support, since they have gone through that and are going through it together with us.”

“It is this form of unprecedented pressure involving illegal restrictive measures, slander and persecution in the international arena, along with all the means of pressure available to our Western counterparts,” the ambassador added. “They face it all in full, so they are well aware that the relations between our countries have the possibility of strengthening further on.”

He recalled that the military and technical cooperation with Venezuela began in 2001 by signing a corresponding agreement.

“Our specialists, who repair and maintain military hardware, are carrying on with their work here. We strenuously bolster Venezuela’s defense capabilities,” Melik-Bagdasarov said.

The diplomat emphasized that the forms of effective assistance from Caracas can be different.

“Venezuela has quite a developed infrastructure of ports. It has deep-water ports and civilian ports. There is a wide range of the Venezuelan Navy’s bases. Another thing is that this is quite a sensitive topic, what is more, our aircraft carriers, guided missile cruisers have called here. And we see absolutely nothing extraordinary in that,” Melik-Bagdasarov concluded.

Earlier, when asked in an interview with RTVI whether the potential deployment of Russian military infrastructure, for example, to Venezuela or Cuba, was under consideration, Ryabkov said that he did not want to “confirm anything,” but added that he would “not rule anything out either”.