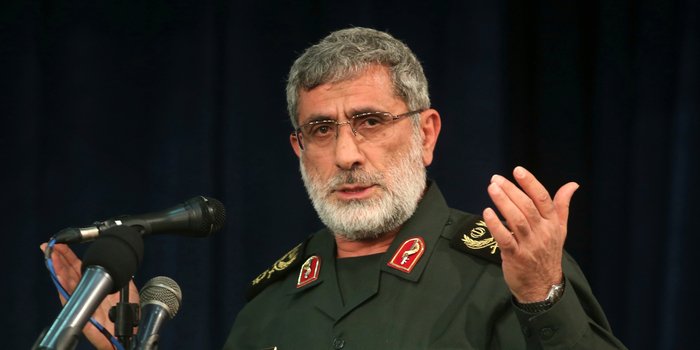 The commander of the Islamic Revolution Guards Corps (IRGC) Quds Force highlighted the degradation of the Zionist regime’s security, saying at least 15 operations are carried out against the regime every day.

In comments at a cultural event in Iran’s northern city of Sari on Friday night, Brigadier General Esmail Qaani said the Islamic Republic would by no means ignore the vicious and criminal acts of the enemies anywhere in the region.

“Although the enemy has received responses for its enmities at a very short time in many cases, we’ll have plans for each remaining one,” the general added.

Pointing to the constant decline of the Zionist regime’s security, the commander said, “At least 15 operations are carried out against the positions of the al-Quds occupying regime (Israel) every day, as they (Zionists) have built fences even inside the settlements for fear of their lives.”

The Palestinian fighters are making plans to hit the final blows to the rotten body of the Zionist regime in the right time, Brigadier General Qaani stated.

Reaffirming the Islamic Republic’s continued support for the Palestinians, the commander said the Muslim combatants in the occupied territories of Palestine have developed such great capacities that they have become self-sufficient in meeting their demands.

In remarks on Thursday, IRGC Commander Major General Hossein Salami warned the Israeli regime that more than 100,000 missiles are prepared in Lebanon to create an inferno for the Zionists.

“In Lebanon, tens of thousands, even more than one hundred thousand missiles, are ready to be fired to create a hell for the Zionists,” he said, warning the Zionist enemy that any mistake will force it to face the “Bayt al-Muqaddas operation.”

The Lebanese Hezbollah is able to bring the Israeli regime to its knees with an operation similar to Fath-ol-Mobin, Bayt al-Muqaddas or Operation Kheibar, the top commander said.