Macron Urges Hezbollah, Israel to Avoid any Action that Could Worsen Relations between Israel and Lebanon 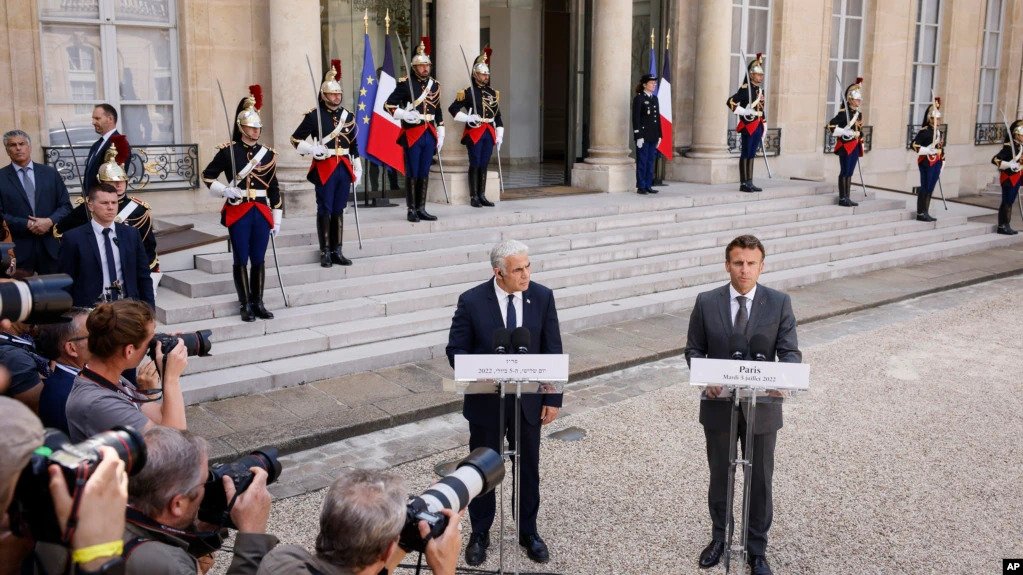 Following talks with Israeli Prime Minister Yair Lapid on Tuesday, the Fench President urged Hezbollah and Israel to “avoid any action” that could worsen relations between Israel and Lebanon.

Iran and its influence in the Middle East were high on the agenda of Israeli Prime Minister Yair Lapid on Tuesday in talks with French President Emmanuel Macron during his first trip abroad in office.

“Iran refuses to seize the opportunity offered to it to conclude a good agreement,” adding that he would “make every effort” to make Tehran “see reason”. Macron told reporters in the courtyard of the Elysee Palace.

“I would like to remind you once again of our desire to conclude the negotiations on a return to respect for the JCPOA as soon as possible,” he added.

“We agree with Israel that this agreement will not be enough to contain Iran’s destabilizing activities, but I remain more convinced than ever that an Iran that would be on the threshold of nuclear (power) could carry out its activities in an even more dangerous way.”

Macron further underlined “We must therefore defend this agreement.”

For his part, the Israeli prime minister said after the two warmly hugged each other on the front steps of the Elysee presidential palace “Back in 2018 you were the first world leader to talk about the need for a new deal with Iran.”

“You were right then, and you are even more right today,” Lapid said, adding “The current situation cannot continue as it is. It will lead to a nuclear arms race in the Middle East, which would threaten world peace.”

Elsewhere in his remarks, Lapid said that “Israel will not sit back given these repeated attacks,” referring to Hezbollah’s three drones which were launched over Karish maritime gas filed in the disputable zone between Lebanon and Israel.

“Hezbollah is a terrorist organization threatening Israel,” he said, adding that Hezbollah was “trying to attack us with Iranian rockets.”

Lebanon’s Hezbollah Islamic Resistance issued late Saturday a statement in which it announced flying three drones over Karish maritime gas filed in the disputable zone between Lebanon and Israel.

In details, the statement mentioned that the two martyrs Jamil Skaf and Mahdi Yaghi group launched three unarmed drones of different sizes towards the disputable area to carry out reconnaissance missions.

The Islamic Resistance stressed that the mission was completed and the messages were delivered, concluding with the Koranic verse, “Victory comes only from Allah”.