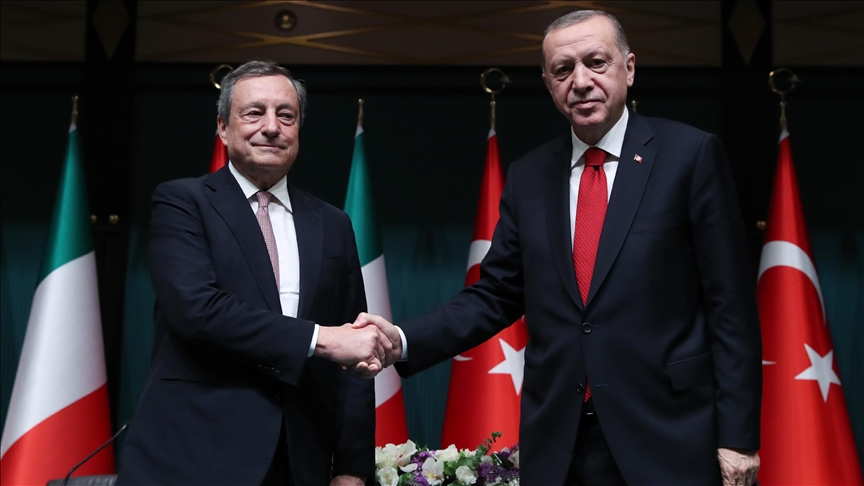 Speaking at a news conference with Italian Prime Minister Mario Draghi, Erdogan said the deepening of Turkey-Italy defense industry cooperation serves mutual interests and both states are on the same page.

Erdogan also said Turkey and Italy are willing to sign an agreement as soon as possible on the SAMP/T air defense system project.

“We discussed the issue again in our meeting today, and our defense ministers handled it in the same way, we want to sign the SAMP/T as soon as possible. There is no problem in our agreement, we also have an agreement with (French President Emmanuel) Macron,” Erdogan said.

Ahead of the news conference, the two countries signed nine cooperation agreements in several areas.

Erdogan also said the two leaders discussed Turkey-EU relations, adding: “I would like to state that I thanked to him for Italy’s support for further improvement of our relationship with the union.”

“The developments in our region have concretely demonstrated once again that Turkey is important in many fields for the EU,” said Erdogan.

For his part, Draghi said “We’re facing great challenges, starting from the war in Ukraine, and we want to work together to address them.”

Italy and Turkey are “united in condemning the Russian invasion of Ukraine and in supporting Kyiv. At the same time, we are on the frontline to seek a negotiated solution that could halt hostilities and guarantee a stable and long-lasting peace,” he added.

Draghi thanked Turkey for its mediation role in unblocking the grain exports from Ukraine, adding “We need to free these (exports) as soon as possible to avoid a humanitarian and social catastrophe in the poorest countries of the world”.

At the Elmau G7 meeting, UN Secretary-General Antonio Guterres has described the lines of a plan on which the UN is working, which foresees a central role for Turkey, he said.

The Italian prime minister also said stabilization in Libya is crucial, noting that Italy and Turkey will work closely for it.